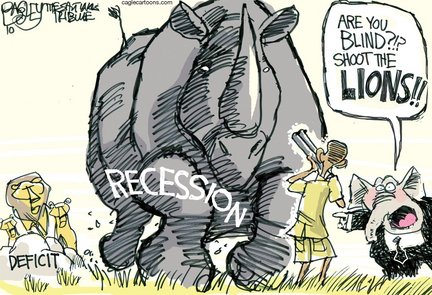 Africans are generally pleased with Sarkozy’s defeat by Hollande. To them it suggests that right-wing western policies are on the decline. Virtually all of free Africa is to the left of most western countries.

Africa’s incredible economic growth, now an astounding 2-3 times the west, is likely to remain 1 or 2 points higher than world growth for the foreseeable future, making it among the best areas in the world to invest.

But the growth comes not from the austerity that the Sarkozy-Merkel alliance has thrust on Europe with disastrous consequences, but rather from aggressive infrastructure development and stimulus. Once working the economies were polished up with modest tax increases that nonetheless reduced corporate taxes while redistributing tax burdens onto the wealthy.

This is not a westerner’s right-hand cup of tea.

And this is hardly “socialist.” The widely respected conservative business quarterly, McKinsey, was among the first to notice Africa’s working formula for economic success:

McKinsey acknowledges that the resource revolution mostly spurned by China in Africa, with new technologies that dig deeper and probe further, account for nearly a third of Africa’s growth. And this is what westerners constantly highlight: Africa’s newly rich commodity markets.

But the other two-thirds is twice as important! And according to that McKinsey report, is linked to social policies that include “government action to end armed conflicts… trimming foreign debt…shrinking budget deficits… and privatizing state-owned industries.”

This was accomplished initially by additional government spending and debt, stimulus. The cash for this stimulus came mostly from China. As the recession pulled China back from its high investment in Africa, governments turned to luxury items, in particular cars, for increased taxes. Even as free trade agreements were being negotiated, new tariffs were smacked on imported alcohol and cigarettes, for example.

The result was an increased tax base, even as middle class individuals felt taxes go down and growth continued right through the west’s recession.

This all began more than a decade ago when Africa was sucking up aid like a dry sponge. I remember the forlorn remarks in those days regarding Africa’s “black hole.” But it was precisely this added spending in a time of no growth that ultimately produced the economic powerhouse Africa seems to be, today. Growth, unlike Sarkozy and Merkel (and Romney and Paul) claim, comes not from austerity but from stimulus.

Everything always seems to begin with economics, but sooner or later social ramifications are inevitable. Sarkozy like Romney is an anti-immigrationist, so to speak. And France has no fewer immigration problems than America. For generations France welcomed Africans from its former colonies with wide abandon. But in the last decade exacerbated by the recession immigrants have become the same whipping boys they are now in the U.S.

In 2007 Sarkozy dropped a nuclear bombshell during a speech in Dakar, the capital of one of France’s former most important colonies, Senegal. He was arrogant, patronizing and insulting, and it marked the start of his anti-immigration policies.

“There’s talk that Hollande will give a rebuttal to Sarkozy’s infamous Dakar speech of 2007.” writes an influential African blogger in Paris, but “the essential point is that Sarkozy is gone.”

Social ramifications will take longer to measure. But Hollande has already called Merkel to aggressively advise her of his public’s serious message: stimulus not austerity.

It’s the Africa way! Perhaps Hollande could make a call to Obama, now? Would Bernanke take the call?