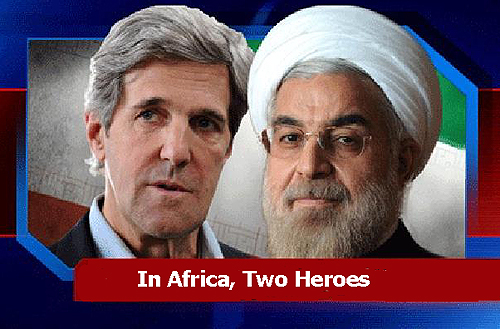 A huge sigh of relief could be heard coming from Africa when the Iran Deal was secured this week. It was hard for them to understand why Americans might not have accepted it.

It was hard for me to find any African opposition whatever to the deal, as hard as I tried surveying every news outlet and blogpost I could find in Africa. I was particularly surprised this was the case in Nigeria.

Nigeria’s potential as Africa’s financial powerhouse rests with its enormous reserves of oil, and the Nigerian government announced recently that it expects a quarter of its government revenues could be lost if the Iran deal goes through:

This is because Nigeria and Iran produce the same quality of crude. Before the Iran sanctions were imposed a number of years ago the two were each other’s main competitor.

Reduced government revenues won’t just occur because Iran will be able to effectively compete again with Nigeria, African analysts warn, but also because there will be “a further drop in crude oil prices” as even more oil is made available to an already saturated market.

So despite this startling understanding, Nigerian public opinion is squarely behind the deal.

“The Republicans dominate the military industrial complex of America and they love and appreciate war more than they treasure and seek peace,” writes an important Nigerian commentator.

This is the sentiment throughout the continent, although outside Nigeria, commentary is a bit more biting:

“In a sense,” writes one of Nairobi’s most prominent columnists, “Obama’s real contest is not with Congress. It is with a small but powerful Middle-Eastern state that holds extraordinary – even abnormal – power over … Congress.

“One can write a whole book on why exactly Israel has this unique capacity to make America dance to her every tune.

“Empires begin to decline when they lose touch with reality. Diplomacy has lost meaning to the Republicans. It’s either their way, or the gun.”

“The Iran nuclear deal would curtail its nuclear programme. The only people who can hate that are the kind who just love war,” according to one of South Africa’s most read dailies.

“For Republicans, the Iran nuclear negotiations have never been about getting ‘a good deal’ for the US. They’ve simply wanted to preserve their ability to kill people … whenever they want.”

These are tough words from a normally moderate and respected newspaper, and it reflects the utter frustration that otherwise thoughtful and intelligent Africans felt when confronted with the possibility that Republicans might have scuttled the deal.

Well anyway, frustrations aside at last, the deal seems done. Perhaps its demonstrable success over the next few years will be one of the final nails in the coffin of America’s Republican Party, an old GOP movement that may truly have seen its day.