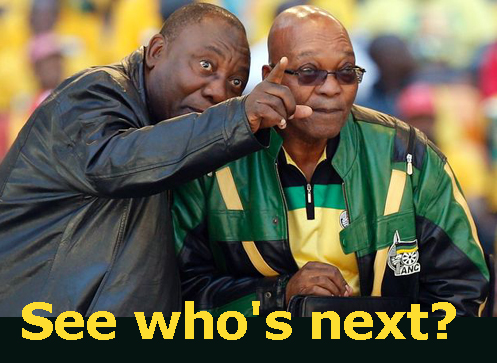 Cyril Ramaphosa is not Donald Trump but they share something loved by their electorates: lots of personal wealth.

Therefore, each is claiming, they are not beholden to special interests.

South Africa is nearing a leadership crisis. The terms of its current president, Jacob Zuma, are slowly and miserably coming to an end, but not quickly enough for South Africans.

Zuma has mounted one scandal after another, and is so plagued by corruption and coercion that he no longer tries to hide it.

His most transparent scandal is the $24 million taxpayer dollars spent building Nkandla, a personal residence in Kwa-Zulu with taxpayer money. Every day that Parliament opens, MPs shout, “Pay back the money!”

So the issue is currently in court, along with other litigation against him for misuse of educational funds, his son’s Playboy antics with yachts and Porsches including killing a taxi cab passenger that he ran into, and horrible neglect of the country’s deteriorating labor union situation, once an essential ingredient of ANC power.

As the second president to follow the saint, Nelson Mandela, he was a great step-down from the quixotic and often enatic Thabo Mbeki, whose legacy is mostly based on his certainty that the AIDS virus was easily washed away by showering after sex.

Ramaphosa might change all this. He has a real shot at following Zuma. He’s as much a part of the inner core of ANC rebels as Mandela, Mbeki and Zuma, which still today seems to be an essential credential for becoming the new South Africa’s Head of State.

It’s all very similar, in fact, to the first several presidents of our own Republic, revolutionary heroes.

But there are real outside contenders developing because of Zuma’s absolute craziness. In steps Ramaphosa out of the business world, where he’s been quietly earning billions.

Frankly I don’t think Zuma’s problem is that he’s beholden to special interests, but the electorate absolutely thinks otherwise.

And they see Ramaphosa the same way so many Americans see Donald Trump, freed from the outside sources of wealth that are so necessary for winning an election, today.

I find this fascinating. In both places wealth creation is not yet presumed evil in itself, even when it can be demonstrated that often that creation is at the expense of the poorest.

Rather, it’s the “dream” that has replaced the dream of freedom: Freedom of tyranny is no longer as important as freedom from your creditors.

I see it as the same thing, really, but the intellectual exercise of equating the two seems beyond the capacity of the 10-second sound bite consumer.

So if you believe this, then you might as well believe that someone who is truly freed from the creditors that broker elections and governance might be a fair bloke after all.

Forget about such incidental things as poverty, disease, infrastructure and the Syrian War. Look at that bank statement!