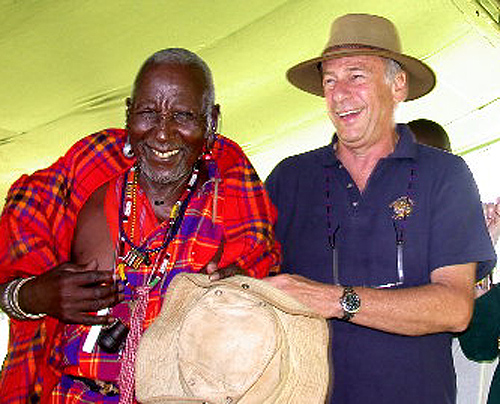 Great circus barkers are so accomplished that they spur the tiger through the blazing ring so effortlessly it creates joy from daring. That was Ari Grammaticus.

In this case, the cheetah on the roofhatch. Ari Grammaticus died last month. His memorial service is tomorrow in Nairobi. With him goes the personal daredevil thrill that was the keystone to many early safaris to Africa.

Ari was the son of a Greek railroader who found himself in Kenya in the spring of safari travel. Film had become cheap and powerful. Air fares were cheap and numerous and Americans in particular began to travel like they never had before. And the British colony of Kenya was newly independent, reshuffling the deck of privilege and business opportunities in ways few could have imagined.

Often you never know if some successful person had a good time or not. Ari had a good time. His smile was infectious. He wasn’t a front guard but he was a big man for his time, and certainly matched any Maasai that he encountered. For some reason that became his connection, Maasailand.

Repeatedly and regularly, Ari traveled to Maasailand until he secured management of a piece of Maasailand that I doubt anyone at the time could truly value. It was on the Mara River about 20 miles north of the Tanzanian border and about 25 miles northwest from at the time the only road into this new non-hunting game reserve called the Maasai Mara.

That was in the early 70s, a year or so before my own first safari. The first place my wife, sister and brother-in-law camped was in this reserve off that main road near a place that remains the focal point for the Mara, Keekorok.

Today the Mara is Kenya’s most important game reserve, whether you measure animal viewing, game management, ease of flying in and out of (there are more than 15 flights daily from Nairobi), range of accommodations or tourist revenue streams.

But not then. The only reason we stopped there was because it was on our journey into the great Serengeti, which we did the next day at first light. The Serengeti and Mara share the political border between Kenya and Tanzania. Then, as now, you can’t really tell where one country ends and the other begins.

But today and since 1979, tourists can no longer cross that border. Until 1979, the Mara was hardly anything but a way station to get to the Serengeti. Today it’s the end of the line for Kenyan tourists, and what a fine end it is!

Ari created Governors’ Camp. (Plural today; very singular back then!) To begin with it was a brilliant name, encapsulating the colonial era with abandon. (Today it would be politically incorrect. Today’s camps all carry local names for area clans or African animal names or local geographical features like rivers and hills.)

But what Ari did was build a tourist camp that recreated the admittedly bold comforts that colonials eked out of the surrounding poverty. There was no need for an apology, then, it was the way things were. Africa was being developed, and if you wanted visitors to come see, they needed a toilet. Animals second.

And so they came. His first camp was Governors’ Camp, today referred to as Main Camp. I remember the old days at this camp before the border closed. It was luxurious by anyone’s presumption of what camping would be in those days: actual toilets (although not exactly quick flushers), hot-bucket showers, and a bed on a frame!

One of the greatest treats I as a young guide had in those days was scaring people to death about camping in Africa! Intentionally, we told them very little, or told them about our own personal camping adventures which certainly no travel insurance would have dared cover. And when they got to the camp and saw the privacy and comfort, we had customers for life!

Governors’ modernized with the times, of course, but it never went over the top, like so many did. Even today there are still pressurized gas lamps as your tent’s main source of light. The beautifully wood paneled bathroom is completely functional with modern plumbing all around and amenities of soap and shower gel and all that stuff.

And Ari modernized, too. He built several more camps nearby, including the more contemporary and luxurious Il Moran. He assumed management of a beautiful lake manor house about half way back to Nairobi, and he built a retreat on Lake Victoria.

And his last great achievement was partnering with a several local organizations and the African Wildlife Foundation to build and manage Sabyinyo Lodge in Rwanda for mountain gorilla viewing. There is absolutely no question that this is the finest property anywhere in gorilla land.

We non-Greeks have this pervading notion that Greeks are first and foremost family men. Ari’s sons now take over for him, and his grandchildren were by his side when he died. Once his friend or his customer or his employee, plan on a lifetime.

Time and again he employed one of the finest camp builders in Africa, even though time and again the builder fell off the wagon while building the roof. I was a certain critic of some of his aging driver/guides, particularly when they starting losing their sight, and of some of his cooks who I felt boiled food too long, but Ari was steadfast. Many claimed he was pinned down by the peculiar and nepotistic politics of Kenya, and that may be. But it all fit a better image:

The Swahili proverb is one of loyalty and constancy. What you see isn’t as important as what you feel. The first time I arrived the little tree barrier into Governor’s Camp, some smiling guard saluted me like I was the King of England. Since then there have been hundreds of thousands of guests that followed me. And yet today, you’ll be saluted.

But times have changed. What Ari did can’t be redone. The world has modernized too much. Travelers no longer go anywhere without insurance, cell phones and extra medication. You can’t fool them anymore with a flush toilet.

Unless, of course, granddaughter Amy decides to develop Taurus-Littrow.