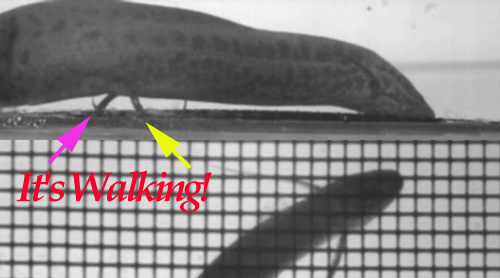 Another breakthrough discovery credited to my forlorn African creature, the lungfish! Apparently it was you, not that obdurate Tiktaalik, that moved life out of the sea onto land! Go buddy!

Yesterday, scientists at the University of Chicago announced a study soon be formally published, proving that the itty bitty fins of the African lungfish even in today’s living species locomote in ways suggesting that the earliest animal footprint fossils could actually be from their ancestors.

And not – as until now widely presumed – from tetrapods like good ole “Tik”. Tetrapods, lungfish and another class of prehistoric sea-living creatures called coelacanths, were all candidates for the Mom that finally pushed babe out of the water, but until now the consensus was that the early lungfish were sort of dead-enders in that evolutionary contest, getting no further advanced really than those we see today in Africa. And that fully land-based walking creatures evolved from their cousins, the tetrapods.

Well, I do, because lungfish are still really neat living creatures many people see on safari, and because I think it helps illustrate evolution if you’re cautious. Like primates such as gorillas and baboons, it crushes in real time the theory underpinning creationists that evolution is unilinear.

“You think you’re related to that chimp?”

Well of course we didn’t come from that chimp, any more than walking creatures today were progeny of the lungfish. The chimp and humans, and the lungfish and all land walking creatures, had a common ancestor, but they diverged long ago and evolved quite differently into a host of varied creatures.

Nevertheless, it is the real time experience of common traits in our “ancient cousins” that demonstrates common ancestors existed in the first place! Long before DNA and other complex tools, all scientists had to work with was this kind of observed anatomy, and it wasn’t so bad. It produced a pretty good foundation for understanding natural selection.

But since Darwin’s and Wallace’s first explanations of natural selection, it has been massively misunderstood.

To me pointing out a chimp — or a lungfish — harnesses anyone’s intuition that there is something in common with us (man) – or anything that walks. It’s impossible to deny. And once that common understanding is reached, we can then contrast the massive differences that are equally intuitive. And the explanation for those massive differences is species divergence over long periods of time.

Unfortunately, there are no tetrapods still around, so until now I was stretching it suggesting that my dear icky slimy lungfish, squirming about in a drying up pool of mud, was demonstrating the emergence of terrestrialness.

No more! Thanks you brilliant guys in Chicago!