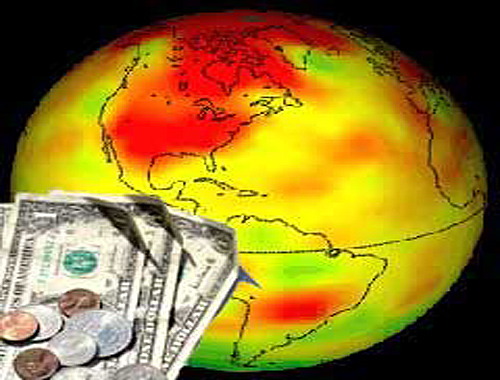 In the shorter runs Africa’s got a lot more to lose faster from global warming than us, but Africa leaders are hailing the specious agreement made in Durban this week. Why?

Because they get more money.

There’s nothing wrong with that, per se. As far as I’m concerned anything that redistributes global wealth is healthy and promising. But I’m afraid that’s about it for Durban. The veritable environmental can’s been kicked a long way down the global warming road.

Everyone’s putting on happy faces about Durban, not just the organizers.

We as high and mighty liberals champion transparency and truth. Then we need to tell it like it is: the torturous so-called end game for a climate change agreement just negotiated in Durban is like a doctor telling a dying man to keep fighting. We might discover new medicines before you gasp your last breath.

And there’s nothing wrong with that, either. Never give up! But let’s call a spade a spade. The Durban agreement does nothing to slow much less reverse global warming.

Kyoto was saved .. sort of by an agreement insisting it be renegotiated within five years. Countries like Kenya and Tanzania heaved huge sighs of relief that a fund was created (or will be after national legislative processes) to underwrite their low-carbon development. And lacking any force of law, now or as I see it in the foreseeable future, the U.S. promised the sky because China promised to curb smoking.

China, the U.S. and India are the world’s greatest polluters in that order. India got on board only when the English language proved it could mean something completely different from what it spelled out in words.

It’s unbelievably confusing. Grown men and women did this! Nature magazine’s Jeff Tollefson did the best in his blog posted immediately after the early morning agreement was made. So if you want to begin the herculean task of understanding the details, read Tollefson.

My take? It’s absurd. Everyone agrees on the science. Everyone agrees that if the world doesn’t halt the increase in average temperature of 2 degrees C from preindustrial levels by 2020, that catastrophe will result. All stipulated, counselor, without caveats or objections.

But the current agreement doesn’t get anywhere near that. It’s like Betty buying a size 8 dress for the wedding when she’s a size 12 and promising to get to a size 10 before the ceremony.

And before the deal was finally signed sealed and delivered the media, between agreement at 4 a.m. and South African sunrise at 7:21a, scientists said the deal would not accomplish any of the stated temperature goals.

And even as Canada agreed to sign its sovereignty away with the rest of the world, it was simultaneously announcing withdrawal from the previous (Kyoto) agreement, which by the way, the current agreement intends to keep on life support. Is this insane?

No, according to Friends of the Earth, just “feeble”.

OK, so Africa’s on board because the new fund promised by the developed countries to help them buy wind turbines, etc., is now doubled. But why should we developed nations be on board for something so feeble, particularly if we believe the science that doomsday approaches?

I guess the first point is that Armageddon has been predicted so many times in our lives that we don’t believe in it. Population growth, DDT use, nuclear proliferation, even fluoride in the water all had credentialed critics certain of a date-specific apocalypse as a result.

And of course there were exponentially more spurious predictions by religious crazies, and I suppose ultimately we started to think Armageddon was just an unreal totally impossible thing.

Probably the most germane bad prediction came from the United Nations itself. In 2005, the U.N. Environment Program (UNEP) predicted there would be 50 million climate refugees by 2010.

There weren’t and still aren’t.

But worse than these infractions of science coupled with our subconscious belief in eternity are the many who use them as certain evidence global warming will not inevitably create a mess of global proportions that we’re unlikely to be able to deal with in any currently conceivable way. And soon.

I can’t imagine anyone living anywhere today who has not experienced truly unusually severe weather. That’s stage one.

Just go to our own master weather geek, the National Oceanic and Atmospheric Administration (NOAA) on any random day and watch the headlines flashing up on the left side of the screen.

But stage three is when we’re overcome with those crises to the point we have to triage with our own vital and immediate needs. That’s the mess I mean. And I believe that’s in the next 15 years.

So build up that 401K, Joe, but trigger liquidation before the ice caps do.