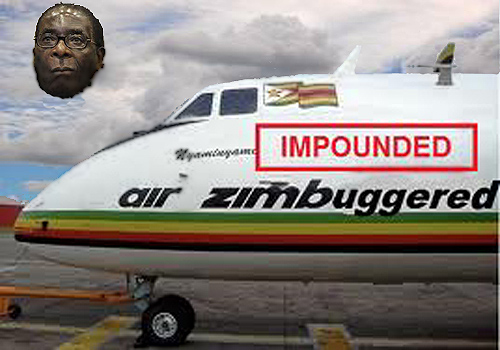 How I wish the end of Air Zimbabwe would be Mugabe’s nail in the coffin. But this vampire gives no impression of leaving before he’s melted by sunlight.

Yesterday Zimbabwe’s diaspora media broke the story: Air Zimbabwe’s one and only 767 had been impounded by the maintenance company owed $1.2 million dollars.

Then, with typical zany Zimbabwean zest, Zim moneybags apparently raised the ransom to pay off the debtor, but the plane still isn’t leaving and we’re not sure why. Well, for the facts, read the Zimbabwe government newspaper, The Herald, and then presume just the opposite:

(1) They didn’t raise the money.
(2) The staff including pilots of the airplane are too scared to return home. After all, someone will have to be punished for such an unwarranted delay.

Either way, a relatively unused although older 767 sits today on the tarmac at Gatwick airport. And you might say that about almost everything of the modern age in Zimbabwe, including the opposition leader and powerless prime minister, Morgan Tsvangira, who once led bloody protest marches but now spends his time explaining why he won’t let a woman into his house who claims to have had his child.

Everything in Zimbabwe has been coopted and drained to the core by its self-appointed evil master, Robert Mugabe. It is one of the most tragic tails in Africa: how this once prosperous, richly resourced, highly educated country can achieve nothing now but misery and comic notoriety.

The 767 is the perfect mascot. This plane often didn’t fly; usually because it had no passengers, but more often because of unpaid bills here and there. That is Robert Mugabe’s standard operating procedure: do. So when he did, but had no money to pay for it, he just waited until someone else paid for him. Usually that was South Africa, and in the case of the 767, China.

The 767’s weekly routine begins Friday night with a scheduled departure from Harare to Peking via Kuala Lumpur. There are several reasons for this bold route. First, Mugabe probably knows that one day he’s going to have to run. And to China might be the only alternative.

Mugabe is reported in some quarters to be 120 years old. In any case, he’s suffered innumerable diseases, including throat cancer, most of which have been treated in a Malaysian hospital which only takes cash. He’s managed to take Rand from South Africa and Yuan from China to pay doctors in Kuala Lumpur.

And the 767 plane is often filled with lots of cronies who have lots of other diseases, so this southern African medivac is welcomed by KL’s underpaid doctors.

Two. China never turns away a foreigner in need. So they buy our treasury bills, and they refuel the 767 and they force lower diplomats to use the airline on their way to Africa. This way China will eventually rule the world.

Three. No one notices when the plane doesn’t fly two out of three weeks or so.

All day Monday it’s supposed to get maintained in Gatwick – you know, oil changes and such. Then Monday night it returns to Harare arriving Tuesday morning. Then, until Friday, it’s now at the disposal of the President.

Now there’s a business plan for you! (It until recently flew midweek to Kinshasa, but that was suspended.)

Zimbabwe is an unreal, a scatological nation held together by outside forces: China as a part of its world strategy to dominate the earth; South Africa in order to keep out refugees who would overwhelm it should any real revolution begin.

So now, Mugabe’s escape is reduced to the range of a 737. AirZim might have one of those left working.