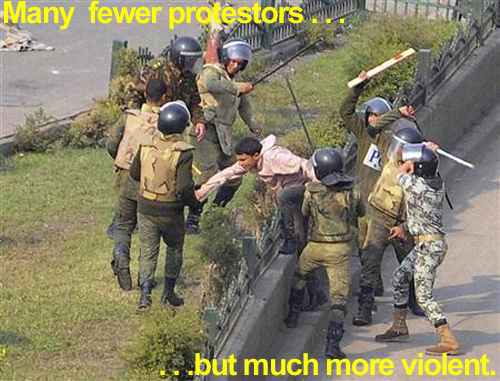 The Egyptian military’s unwarranted, brutal response in Tahrir Square is specifically because there aren’t enough protestors, there, anymore. The bully always pounces when his adversaries thin out.

The Tahrir Square protests right now are extremely small but extremely violent, contained almost exclusively to a ten-square block area in central Cairo. The vast majority of Egypt is carrying on with everyday life, including what had been explosive centers of the February revolution like Alexandria.

I just finished watching the live al-Jazeera report (around 11 a.m. EST) following the military’s “open” press conference regarding the current violence. The reporter explained how there seemed to be “parallel universes” between the military’s constant denial of its use of force against protestors, and the protestors YouTube posts.

Yet right behind her on Tahrir Square was a massive traffic jam as everyday Egyptians headed for home after a day of work.

There is no question in my mind that the way the military has handled this nuclear pinpoint is wrong and incendiary. But what it suggests isn’t that the current set of elections will be disrupted, or that the country is right now poised for civil war. Rather, it suggests that all that may happen later, after the elections are complete and the process of writing a constitution begins.

The facts are easy to come by, and this alone shows how far along the road to democracy and transparency Egypt has come, and this is good:

First, the numbers of people involved in the current Tahrir Square protests is a small fraction of the revolution that toppled the Mubarak regime in February, but it is actually for its much smaller numbers much more violent.

In large part this is because of the military’s heavy handed response, far more severe than its restrained responses to much larger protests earlier in the year. And it reflects the military’s confidence that a vast majority of the overall population supports it, and this is probably true.

So this time around there are “per capita” many more petrol bombs heaved from the protestors at Tahrir Square. The protestors’ rage when unpopped seems ungoverned by any ideological strategy. At times the protestors seem to fight among themselves:

According to the Associated Press, a precious research center maintained by France since its 18th century occupation of Egypt found itself in the crossfires Saturday. The building caught on fire, and protestors joined institute officials in trying to save the precious archives.

But when fire fighting equipment arrived, other protestors barred the equipment from trying to put out the blaze.

So what’s going on?

“The military’s violence suggests it feels emboldened,” Britain’s Guardian newspaper said Monday. The paper went on to say that the elections have been the “freest and fairest elections in the country’s modern history.”

Two of the three sets of elections for the lower house of Parliament are now complete; the third one is in a month, and that is followed by an upper house of Parliament election in late February and early March. All signs currently point to the Muslim Brotherhood, which currently has just under 40% of the winners, leading a coalition government that will include at least one very radical Islamic party.

And until Thursday, the Brotherhood had supported the military’s strong handling of the electoral process. That’s changed.

Mohamed Baltegy, a senior figure in the Brotherhood’s Freedom and Justice Party, called the military a “collaborator” in the disruption of Egypt’s safety and security. He charged that the military rulers “create new crisis as the time for a power transfer to civilians gets closer.”

Veteran Associated Press reporter Hamza Hendawi interviewed top military officials over the weekend who insisted the protests were caused by foreign infiltrators. He continued: “What are we supposed to do when protesters break the law? Should we invite people from abroad to govern our nation?”

This, of course, is laughable. But there is a connection to reality. The military has consistently refused to cede any power over itself to any civilian authority, now or after elections. It sees the February revolution as an endorsement of its supreme authority, and it has announced that it will solely shepherd the process of creating a new constitution.

And that it has no intention to allow any new constitution to reduce its authority, a conundrum that few political activitists in Egypt will accept.

The protests are small but violent, now. When a political, civilian authority is duly placed in power through elections, and if the military then refuses to cede control over itself to that new authority, that is when Egypt will explode.