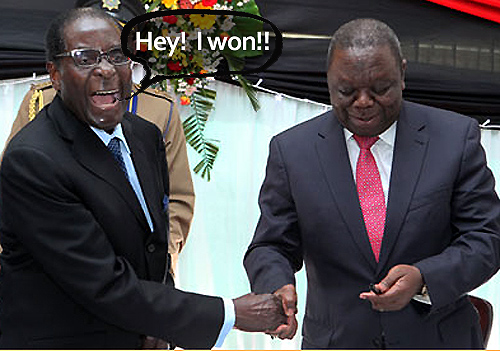 Africa’s longest-serving dictator and one of the most evil men in the world, Robert Mugabe, will be validated by democracy as Zimbabwe’s leader again on July 31.

It will be his third “democratic” election and without doubt, his third victory. It will be the third time that his single opponent is the dumbly masochist, Morgan Tsvangirai, who has endured torture, humiliation and the murder of his wife, to spot Mugabe over the last 15 years as the opponent who gives Mugabe credibility.

I am intrigued by the time and resources that Mugabe has committed to this facade of being a democratically elected and warmly loved leader. Tsvangirai holds the questionable title of “Prime Minister,” and may indeed, hold it again after Mugabe is elected, again.

So he gets a nice house and a stipend for good clothing, but alas, he’s rarely allowed to leave the country and his meetings and rallies are monitored by Mugabe’s thugs who then routinely beat up anyone in the public who seemed engaged.

Most of the time Tsvangirai speaks to himself, and pity to the few earnest supporters putting their lives on the line for such dastardly acts as waving a poster.

Mugabe has expended notable effort this time to get outside observers. Of course, the most respected outside observers of elections – the organization that actually founded the idea – the Carter Center, has been banned.

So instead he will have observers from Russia and Serbia. (There are others, including the more respectable African Union, but that organization does hate to upset its dictators.)

And despite truly heroic efforts by many good Zimbabweans to do such things as register voters, it’s essentially impossible to register unless you prove your loyalty to Mugabe, first.

The private and somewhat secret website in Zimbabwe to help fledgling democrats register is called “MyZimVote.” Illustrative of its primary function is a giant map with red circles counting the number of gross violations around the country where persons attempting to register were denied … or beaten up.

This and a bunch of other laws and regulations that actually does manage to out-shame Texas means Mugabe’s victory is assured.

All in the name of democracy. And while it would be hard for the most poorly trained political scientist to call this “good” democracy, it does go through the motions. It does a little better than Stalin’s 99% wins. And above all it proves that most everyone – even the grossest of leaders – ascribes to the theory that the people should decide who rules them.

And that leads to the marvelous question of whether these pretenders, from Mugabe to Bush, really believe they have been elected by the people, or if they realize it’s a sham from the getgo.

Bush believed. Mugabe knows it’s a sham. I guess that’s the difference between poorly educated and a thug.