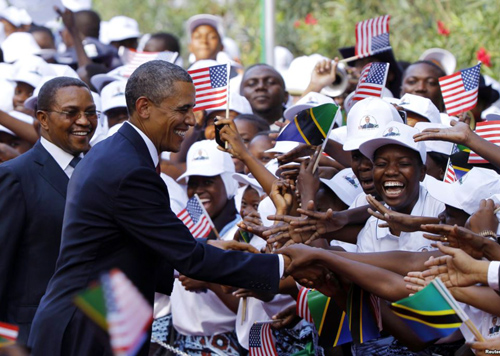 American presidents one-upping each other is hardly news at home, but this time round it really is news for Africa. George Bush is personally credited with $15 billion for Africa, now Obama with $16 billion.

This year the Obama Administration requested a total of $7.5 billion for USAid to Africa. Twenty percent of that is for Egypt, with the remaining 43 beneficiary countries receiving $5 billion.

Nigeria is in second place, no surprise. If the country can ever solve its ethnic problems its massive oil reserves will make it literally one of the most important countries in the world.

But what is surprising is third place, Tanzania.

Obama just completed an Africa trip where the signature speeches, most dramatic announcements and largest contingent of Americans traveling with him (800) were in Tanzania. Why Tanzania?

Tanzania’s human rights ranking is terrible. Just before Obama arrived, an opposition rally in Arusha was brutally crushed by police. A month before Obama arrived the Tanzanian government announced wholesale movements of Maasai from their native lands to increase a hunting reserve for Arab princes.

And there’s been scandal after scandal, many centering on the country’s 15-year inability to make money from the discovery of the world’s second largest gold reserve.

Compared to neighboring Kenya, Tanzania is a banana republic with no clear optimistic future.

There are two reasons. The first is because Obama’s predecessor, George Bush, doled out a huge amount of his $15 billion AIDs initiative in Africa to Tanzania. Why Tanzania? Because Kenya wouldn’t have him and South Africa didn’t really want him, either. In fact, because most of Africa did not want to be associated with George Bush.

The Bush Administration alienated most of the world with its invasion of Iraq, Africa included. Its foreign policy was hurtful to emerging countries in virtually all areas, from conservation to economics.

And its missteps were many and severe in Africa. Perhaps the most notable for this discussion was when George Bush became the only leader in the world to congratulate Mwai Kibaki on becoming elected president in 2007. Which he hadn’t been, which was why no other world leader offered the congratulations.

But those congratulations Kibaki immediately published on Kenyan media to consolidate his illegitimate claim to power, and that led to the terrible violence of 2007/2008.

So by process of default, Bush went to Tanzania. Obama has to one-up him. Bush’s $15 billion was for AIDS aid. Obama’s $16 billion is for electrification.

Drones have assassinated no fewer than a dozen terrorists while they were living in Kenya and Tanzania. Kenya doth protest. Tanzania doesn’t.

Aid is a tricky game. I have a sense that Obama has mastered it far better than Bush did, but he’s shackled by his militarism and obsession with killing terrorists, and influenced by not letting his predecessor shine more brightly.

Aid is a tricky game. Morality isn’t. I don’t know how long it will take for America to sync itself into a truly moral stance after our generations of warring, but it doesn’t look like it will be soon.