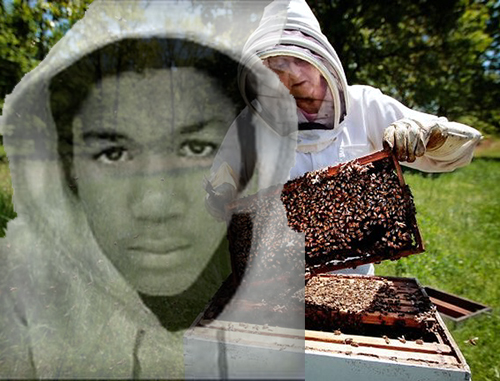 Racism on the march, from Trayvon Martin to African Killer Bees … again. From rhino horns that are not aphrodisiacs to setbacks to immigration reform.

It’s a depressing Monday in the free but dumb world.

I know a lot more about inappropriately named “African Killer Bees” than about the Trayvon Martin case, but the fact is that it doesn’t take much for anyone to know about either to realize the implications.

As has been pointed out time and again, there is no such thing as an “African Killer Bee.” It is the same honey bee, the exact same genetic honey bee, as lives all over the world. The behavior of this creature in equatorial Africa developed a bit differently than in the non-tropic world … obviously, don’t we all?

And yes, the behavior of the equatorial bee can legitimately be called more aggressive than its sisters and brothers that have to deal with winters. The best and least disturbing explanation of this was a PBS interview of bee expert, Justin Smith, several years ago.

The bottom line is that the difference in aggression is not considerable enough to even begin to warrant the panic and racist fears that still continue, today. Just as some pet dogs are more aggressive than other pet dogs, you deal with it:

Whether you’re the owner, or the neighbor. Neither dog, and neither bee, is going to kill you if you don’t try to bite it.

But alas, what do facts have to do with any of this? Truth? It just doesn’t seem to matter.

Where predators range from birds to honey badgers to humans. That sounds like Memphis.

But no, it isn’t. It’s those dastardly creatures whose “origins in Africa” make them so bad.

Lollar’s story was picked up all over the south and his wild and unsubstantiated claims spread pell-mell.

Lollar claimed that Tennessee authorities had determined that one local honey bee they tested proved 17% African. (How much is Obama?) But the Tennessee Department of Natural Resources has no such test available and has a much more realistic appraisal of bees in the State than Lollar.

That appraisal in the link above was for January, 2008, and the department has found no need to make any change.

If anything, we should be grateful for the arrival of the African honey bee, because there’s every evidence they contributed to the successful turnaround against the horrible virus that was decimating bees in North America this decade.

But here’s my real scoop, today, are you ready?

There are worse bees in Africa than the honey bee! More aggressive, better pollinators, probably more dastardly and with a stronger sting! Ouch!!

See below pictures taken just in the last few weeks in Kenya and Tanzania by dudu sleuth Dino Martins!

And Beware! They’ll be in New Haven by Labor Day!