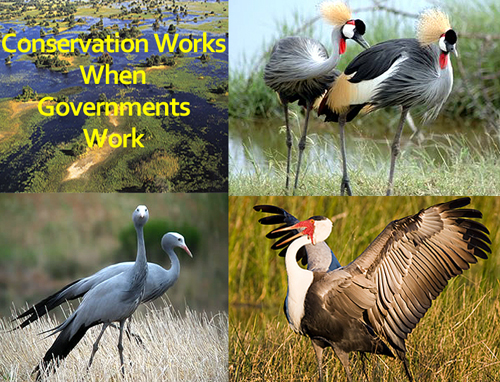 Africa’s beautiful cranes have become a maypole for world conservation, but I don’t believe the birds – or the world – will be saved by private initiatives.

Recently I had the privilege of visiting the International Crane Foundation in Baraboo, Wisconsin. Founded on the fairy tale conservation story that saved the Whooping Crane, the Foundation today extends its work around the globe, protecting fifteen species of crane worldwide.

I was particularly interested in their work with the four African breeders, the Black Crowned, Grey Crowned, Blue and Wattled.

Each of these birds is incredibly spectacular; the crowned and the other two types have distinct behaviors, and they all get the attention of my clients even those who are not birders per se.

And all of us guides have watched their decline… and, in the case of the wattled, the promise of a comeback.

Hardly a decade ago, flocks of black crowned cranes were common on every grassland wilderness. Although they peal off in pairs to nest, large flocks were common before nesting and among the fledglings.

Their funny low-decibel honking, very much like a goose, often introduced them long before the explosion of colors and ballet of flying together got everyone’s attention.

But the crane in general is an indicator of much more than beauty alone. Cranes are wetland birds. Like so many birds in a variety of ecosystems, cranes indicate the health of the world’s wetlands.

And wetlands – at least for the time being until new technology is developed – is the way the world cleans itself while simultaneously producing more clean water.

Now Africa’s cranes are often found as I’ve seen in near desert environments – they’ve adapted nicely to the desertification of Africa. But they tend to nest in as wetland an environment as possible.

So we might deduce that Africa’s cranes are in the forefront of the decline of wetlands, managing to adapt historical behavior to the decline of good water resources, because Africa’s wetlands are in a more serious decline than elsewhere on earth.

But we may have reached an untenable point in that decline. Over my forty years I’ve watched the crowns “come and go,” so to speak in terms of their anecdotal visible numbers. But in the last 3-5 years they’ve been going and not coming back.

And this stands in marked contrast to the Wattled Crane of southern Africa, which while more threatened to begin with than the crowned, seems to be making progress, albeit slowly.

And this little bit of evidence is why I don’t believe that despite the invaluable work of organizations like the Crane Foundation, the cranes – or for that matter, any world ecosystem – will be saved without massive government involvement.

A lot of people don’t agree with me. Another recent visitor to the Crane Foundation in Baraboo, Carl Gibson, wrote recently in the Huffington Post, “Cranes and Climate Change: Why Our Survival Depends on Local Solutions.”

In a somewhat convoluted way Gibson claims that private initiatives like the Crane Foundation can ultimately control climate change, which he correctly faults for much of the world’s current conservation crisis.

Gibson lauds “small business” and business green initiatives for being “ahead of the federal government … find[ing] ways to generate our own power, run our businesses sustainably, and conserve natural resources and biodiversity if we’re to survive extinction as a species in the next century.”

Like the leadership of the Crane Foundation and many other good conservation organizations, there’s a belief that government either can’t or won’t address the problems they do.

They’re wrong, and it’s time that we change this destructive attitude that’s arising between well-meaning conservationists and their governments. I find so often today a nihilistic attitude by private conservation organizations towards governments. This has got to change.

The reason the Wattled Crane has a current better trajectory for long-term survival than the crowneds is because the governments of southern Africa have more aggressively dealt with wetland issues. It’s that simple.

The remarkable effort by the Botswana government to create boreholes in the dried up Ngami River and its tributaries … for 26 years until they refilled two years ago!… is a case in point. And it’s just one of dozens and dozens.

Now to be sure the Crane Foundation and similar conservation organizations perform just that type of work. But they are uncoordinated with overall environment strategy and often fall well short of what a government-funded project is capable of.

The Crane Foundation is an outstanding organization. And like many others like it, one of its greatest legacies is the scientific expertise that it builds over the years. That is critical to saving the world.

But so are governments. And Carl Gibson is wrong. Our personal resources and initiatives should be directed first to guiding and controlling our government then towards private organizations.

Without government involvement, there is no hope.