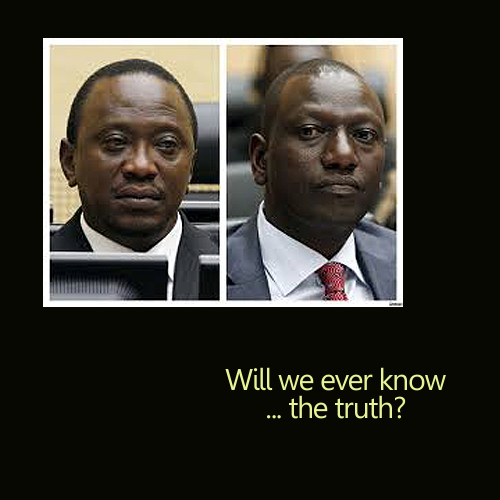 The bizarre story of the world trials of Kenya’s leaders grew ever the more bizarre yesterday and when bundled with incidents like Trayvon Martin shows just how fluid, uncertain and perhaps even meaningless justice is.

Whatever else you concluded about the George Zimmerman trial, you must agree that its outcome was based as much on technicalities as “justice.” And by that I mean that Zimmerman shouldn’t have shot Martin, but somehow, he got away with doing just that.

Kenya’s president and vice-president are widely presumed world-wide, by diplomats and journalists and scholars alike, if not directly causing the terrible violence of 2008, certainly encouraging it. They’re widely presumed responsible in some significant measure for the deaths of more than a thousand people and the displacement of a quarter million.

The distinction between “causing” or “encouraging” is the point of the trials. Causing is criminal. Encouraging may not be criminal. And that’s the task assigned to the World Court in The Hague … finally, by the Kenyan Parliament.

But even were a successful trial in The Hague to find both President Uhuru Kenyatta and Vice President William Ruto innocent of “causing” the violence, real democratic societies would not allow them to continue as leaders.

Real democracies do not tolerate leaders whose citizens those leaders allowed to be massacred. Historically they could be seen as having tried to begin a civil war, but if so they lost that war. Kenya is still Kenya, whole if scathed. Jefferson Davis did not become the President after Lincoln. Kenyatta and Ruto shouldn’t be Kenya’s leaders. They are. And they might be for a long time.

Two of innumerable cases worldwide where justice has been lost.

The George Zimmerman trial is over. The just concept of double jeopardy makes it impossible that he be tried for murder or manslaughter, again. But the trials of the Kenyan leaders haven’t even yet begun.

The legal manuvering in the World Court has been considerable. The most significant of many unexpected twists and turns are the reduction of the witness list and the adjudication of whether these national leaders need necessarily attend their trials in person.

The former is much more salient to achieving some level of justice than the latter, and besides, who in their right mind believes if found guilty either of the men will resign, take the first plane to Amsterdam and let themselves be incarcerated?

It’s a foregone conclusion that regardless of the outcome of the trials, Uhuru Kenyatta and William Ruto will never be behind bars in The Netherlands.

But many of us would like to know if they really are culpable. We could be wrong, couldn’t we?

Africa is rife with Shakespearean mysteries. Perhaps the defendants’ claims that each and every one of the witnesses against them is either lying or being extorted is true. It seems unlikely, but “beyond a reasonable doubt” is something that only a good court can ascertain.

And that part is becoming less and less likely. Witnesses have been dropping out like flies. The reason given by The Court is that they fear for their security.

There’s every reason to presume this true. Kenya’s most historic murder trial was of the politician Robert Ouko, likely killed in the then Kenyan dictators’ residence. Witness after witness either dropped out of the trial .. or was murdered.

But this time there’s hope we will know. Kenya’s own parliament declined holding trials or other judicial investigations to determine those responsible for the 2008 violence, and so conceded that right legislatively to the World Court in The Hague.

So we want to know. Kenya’s Parliament wants to know. We know whatever the outcome, Kenya’s current leaders will not go to jail, they will avoid that justice to be sure. But that doesn’t mean we don’t want our own theories validated, or shown to be incorrect.

We want justice, at least the first step of discerning the truth. And I can’t imagine why every single Kenya wouldn’t want the same.