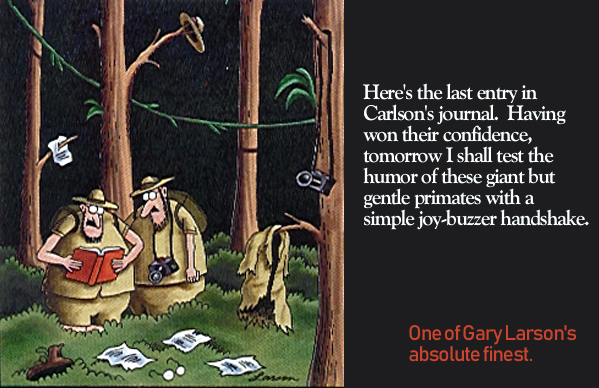 I saw my first gorilla in 1977. It was an eastern lowland gorilla in Kahuzi-Biega national park in The Congo, a species of gorilla (graueri) that’s still going extinct. I watched several Italians throw tomatoes at them. There were no guides then. You just climbed into mountain jungles and threw things at fur. It was an improvement over shooting.

In November the most celebrated of the four gorilla species, the mountain gorilla (berengei), was moved OFF the critically endangered to just the endangered list. I was exhausted and exhilarated learning this. And nobody partied. No ticker tape parades. The world’s just too damned complicated at the moment.

A couple weeks ago I wrote sarcastically about the UN’s stinging report on the decline of species, not for its thundering facts or terrifying implications, but because the scientists involved chose not to link it principally to climate change.

Scientists are on the hook again for eschewing the full truth this time in central Africa for the November announcement that the mountain gorilla had improved so much in the last forty years that it was no longer in imminent threat of extinction.

The first scientific rebuke was for bad news. This one is for good news.

In both the scientific case is critical that we all understand. The point I’m making now however, is that we can’t continue to shed tears for the oh so terrible ignorant sop who refuses to embrace science when scientists deliver their news like cowardly milksop teachers who scratch out the D and write a C under the scornful gaze of a privileged parent.

EWT sent the second paid tourist up Karisimbi Volcano to see the mountain gorillas in 1979. Dian Fossey shot at him. He ran down the volcano so fast he beat his porter. He was not refunded his $25 conservation fee.

Back then there were less than 300 of these celebrity mountain gorillas. They were truly one of the rarest things on earth, because nobody thought they would survive.

The area in which this beautiful creature lives suffers from continuous war and civil unrest, repeated outbreaks of diseases like ebola, conservation corruption that you can’t imagine, and yet by last November there were a thousand individuals, almost a 400% increase from their nadir.

THE REASON? There’s rarely a single reason for anything. But there’s often a principal reason. In the bad news case of the milquetoast UN report it’s climate change. In the good news case of the mountain gorillas it’s rich Americans.

Well, not exactly. Mostly Americans but also rich Brits and Argentinians and even rich Chinese (whose safari is composed of visiting the mountain gorillas and buying Tanzanite).

Rich people. It costs $1500 per person to sit for one hour with these magnificent things in Rwanda’s Parcs de Volcans. And of course that’s not the whole ticket.

(See my blog of December 14 for why it’s unwise to visit mountain gorillas in The Congo or Uganda. Click here to see why it’s deadly dangerous to try.)

Parcs de Volcans is three hours from the mostly nondescript almost-city of Kigali. Once at the park there are a variety of accommodations from hostels that cost $40/night to fabulous lodges that cost twenty times that. Everybody has to pay the $1500 permit.

I figure that about 5% maximum of what a person pays on safari in Kenya, Tanzania, Botswana or South Africa goes to conservation. In Rwanda it’s more than a third. The remainder sustains a vibrant, job-producing tourist market that would otherwise not exist.

In fact a number of other important projects in Rwanda – including chimp research, womens’ health care, water purification, a shoe factory, fiber optic internet to rural communities, the rebuilding of the Akagera wilderness – can all be easily linked to the success of the mountain gorilla project.

The “principal reason” for all of this is … rich tourists.

That’s rather crude. It’s kinder and not untruthful to say traveling philanthropists. Many of us radical socialists prefer that taxes cover chimp research and womens’ health care. But that’s not the world, today.

So even I’m thankful for rich people saving the gorillas. I’ve guided rich people 52 times up all the different volcanoes in all the three countries in wars and peace to see them. I’ve seen all four species. My son was charged by a silverback. My daughter and I barely avoiding being kidnapped by the Interamwe trying to see them. I nearly cried when Titus died.

I’ve had precious experiences with the most famous scientists, conservationists and professional film makers who collectively contributed to throwing the rope down the abyss and pulling these magnificent beasts out of extinction.

But let’s be real, and honest. There were dedicated scientists, passionate conservationists and chroniclers of the moment as artistic as the Fauvists. They were useless without … the rich tourist.

Unless we embrace climate change as the root cause for species decline, the living world will not be saved. Unless we cultivate rich tourists, the mountain gorilla will go extinct.