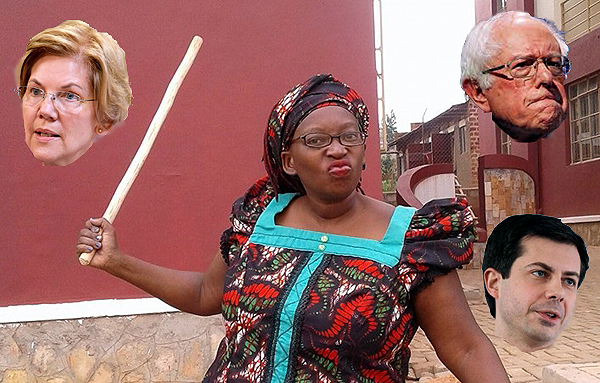 In our morose and combative world it’s such a struggle to consume the minimum amount of news to keep a sense of reality. It’s very easy to slip out of this challenge and thereby decay into fodder for all things evil.

One very difficult task is to contrast social with political issues. Yes, Roe-v-Wade seems more vulnerable than ever, but it stands and it stands while freedom of sexual orientation, gender and pay equality actually move forward progressively. Who’s among the top 3 or 4 democratic candidates right now?

A perfect example of how this struggle is global can be found with feminist Stella Nyanzi in Uganda.

Prof. Nyanzi is a world-respected medical anthropologist who received her Ph.D. from the London School of Hygiene and Tropical Medicine. She proudly defines herself as queer and most of her published research is on the sexuality of young Africans.

Uganda has some of the most barbaric laws against gays in the world, and if you’ve followed my blogs over the years, this is a direct result of American evangelical intervention.

But Prof. Nyanzi defiantly and boldly returned from 15 years of education abroad to assume a prestigious position at Uganda’s preeminent university, Makerere.

Despite the horrific laws the Ugandan LGBT community has actually grown in power and influence over the last few years. More of them are tortured and more of them are jailed, including now Stella Nyanzi, but their growing influence is undeniable.

Last fall Prof. Nyanzi published a “birthday poem“ for the Ugandan dictator Yoweri Museveni. Two important things to understand before you click on that link and read the poem:

The first is that Museveni is now so powerful that his birthday is becoming one of the most important holidays in the country. Secondly, Prof. Nyanzi’s poem is crude and by western standards extremely offensive. This comports with ordinary Ugandan cultural criticism, which could just as easily be leveled at your disobedient dog or cranky Uncle. I’ve never liked it, but it’s very, very typically Ugandan, so nothing extraordinary in this high-profile incidence.

Nevertheless it was bold. And promptly after going viral Prof. Nyanzi was charged with a basket of crimes including misuse of social media and defamation of the president.

She was jailed and refuses bail while her lawyers successful delay legal proceedings which seem to be actually going well for her.

Recently Ugandan human rights groups gave her several national awards, upping the stakes with the government. Her young daughter was her stand-in for the widely publicized ceremonies.

Meanwhile much of the normally passive Ugandan media is beginning to support her, or more correctly, to finally allow op-eds supporting her to be published.

This is the continuous linear advance of not just acceptability of, but influence by the Ugandan LGBT community even as support for the dictator also seems to increase. There is a growing feeling among intellectuals worldwide, however, that the political support is facile but the social support is substantive.

In Uganda, for instance, opponents to Museveni have generally been beaten to near death, jailed or ridiculed and have emerged from such previous jobs as a DJ at weddings. Recently, however, an Uganda general announced he was going to oppose Museveni and then about a month ago expressed support for Nyanzi.

He has not been jailed or beaten to near death in customary practice and in large part it’s because he’s embraced the powerful social movement in his country.

Can the LGBT, womens’ rights and equal pay movements lead our politicians out of the political morass that overwhelms us daily? Take it from the top: Sanders, Warren, Buttigieg…