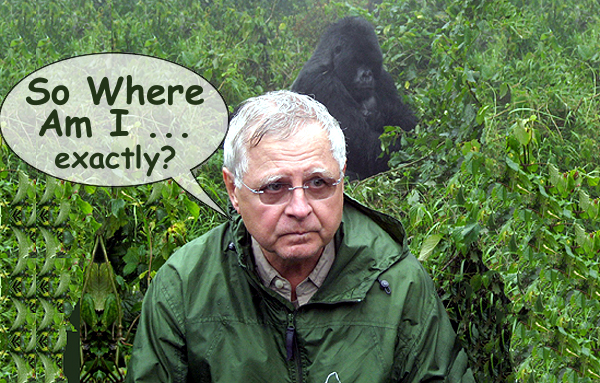 And it really, really matters which one.

That photograph was taken in Rwanda’s Parcs des volcans. But it could just as easily be the DRC or Uganda, because these three countries border one another in that forest. Fortunately for the tourist in the picture he made the right choice.

There are around 1000 mountain gorillas in 60-70 family groups in the forests surrounding eight volcanoes in this center of Africa. Most of the creatures are found in Rwanda, because that’s where they’ve been best protected and studied.

About half of all the gorillas are habituated or in some state of becoming so, but less than 200-250 in 25-35 family groups have been habituated enough that it’s safe for tourists to visit them.

It’s been at least two and usually three generations of gorillas since the time when humans only sought to hunt or collect them, but hunting and even collecting continues pretty much unabated in the DRC and likely occurs in Uganda as well. Rwanda has been free of such nonsense for years.

You don’t want to be around an unhabituated gorilla. I have been, and I’ve been charged head-on (but never hit). I’ve had my backpack torn off my shoulders and thrown at least three stories into the canopy above. I’ve had two early clients who had their cameras crushed in the gigantic palm of a silverback.

The tourist trek is supposed to be the same in all three countries: Your driver takes you to the base of one of the eight volcanoes up which the gorillas spend most of their time, or to a high entry point to one of the forests that spans the volcanoes.

You meet your ranger, hire your porters, then trek into the forest. In the early days there was hardly a trek less than eight hours long. One of my more recent treks in Rwanda took 20 minutes! They average 2-3 hours, although occasionally longer treks are not uncommon. In Uganda and the DRC it’s usually longer.

Once the family is found, tourists are held back briefly while the rangers “introduce” the party to the gorilla family. Humans then move closer to the family, sit down in the forest to enjoy an hour’s tea social with their second-closest relative.

COST: The permit for one gorilla visit is $1500 in Rwanda, $600 or less in Uganda, and wholly negotiable in the DRC. A no-brainer? Well, it should be. If it’s too good to be true, it probably is.

Most tourists even with the smallest budget spend thousands of dollars for this experience and dedicate a lot of positioning time. Not buying the best invites disaster. If you wish a reliable experience, if you want to help conserve mountain gorillas, then you will not travel to either Uganda or the DRC.

Informed tourists know something’s not kosher with Uganda and the DRC.

The reason not to visit the DRC, unfortunately, is easy: War. Almost continuously for the last 30 years.

There’s more melancholy to Uganda’s failures, because once it was the jewel in the crown for safari travelers. Many tourist companies continue to go there, simply relying on their history rather than being vigilant for consumer safety and reliability.

Over many years of intensely corrupt governments and ruthless, violent dictators, almost every level of Ugandan society now has withered to self-survival at the best, and deceit at every moment at the worst.

Yes, the routine may look the same, but the guides are much different. Rwandan guides are among the best experts on the continent. They receive an average pay ($17-20,000/yr) that allows them to pursue further education, educate their children, travel and become real consumer advocates and gorilla conservationists.

Ugandan guides often aren’t paid at all. They rely on tips and bribes. This stress on their daily life explains why they often broker excursions outside the rules: selling false permits and taking unaware tourists to family groups that either are not yet habituated or reserved for scientists.

More than once my groups in Uganda were taken to questionably habituated families, and several times we joined other tourists already viewing the gorillas, which is not good for tourists or gorillas.

Scientists have concluded that together in the entourage of rangers and hackers, there should be no more than 6-8 tourists per visit. In several cases EWT groups in Uganda were among 20 or more tourists watching a single family.

One of the last treks I took in Uganda was with my daughter and six friends into the Mgahinga Reserve. The full story is a chapter in my upcoming book, The World by Ole Kulit, but basically we were taken by two Ugandan “rangers” through the forest into Rwanda to be kidnapped by the Interamwe. We foiled their attempt at the last minute, but the Australian group that followed us some days later were all kidnapped and several killed. End of Blog.