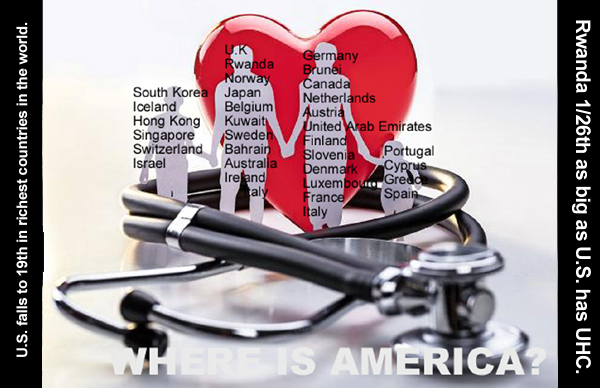 Last week Rwanda, one of the smallest countries in the world, announced completion of Universal Health Care (UHC), and Kenya announced the start of UHC pilot projects across its country.

Since 2000 the U.S. has dropped from second to 19th of the world’s richest countries, in great part because it has refused to adopt UHC. When health care is private, the costs dominate economies and constantly escalate reflecting the richests’ capacity to purchase the best. Private health care is making us poorer and poorer and in the long run will destroy the country.

Rwanda has been moving towards UHC for several years. Kenya has only just begun, applying it right now to only one of its 47 counties (Kisumu) and starting pilot programs in 4 others.

During the launch last week, Kenyan President Uhuru Kenyatta observed that “the prohibitive cost of medical services push over a million Kenyans below the poverty line every year. In a country with over 60 per cent of its population poor, having a condition that sends a million more to poverty every year is catastrophic. If this situation is allowed to continue, we can as well start preparing for a 100 percent poor country in a not so distant future.”

There are two main arguments opponents to UHC in America usually use: (1) it’s too costly; and (2) it’s too much government interference.

I think we’re seeing right now what not enough government interference brings: chaos. Basically the Trump administration is tearing down everything that America has created in my life time, whether that be environmental protections or institutions to promote equality and human rights.

Like many I believe the storm clouds are forming and that the economy, as the ultimate barometer of society’s health, is headed for a nose-dive. Even if it doesn’t, the numbers for the last two decades prove how America is getting poorer and poorer relative to the rest of the world, and that continues even when the stock market rises.

The notion that it’s too costly is completely subjective.

The fact that two small African countries, one only 1/17th as rich and the other only 1/26th as rich as the U.S. now implement UHC, is indication enough that it’s the right thing to do. Rwanda is an iron-fisted dictatorship. Kenya is an often chaotic democracy. Yet both recognize that without UHC in the modern world, their economies will not grow.

For those small and emerging nations to implement UHC a lot of tough decisions have to be made on what else not to do. So the arguments that UHC is too costly need a lot more elaboration.

It may seem silly, now, to be discussing a giant new government program in the United States when even our smallest programs are being destroyed. That, though, is where optimism that our current politics will end can be found.

It’s not unusual that I suggest America look to Africa for answers. And, of course, it isn’t just Kenya and Rwanda that have UHC. It’s essentially all the sane and fiscally responsible countries of the world.