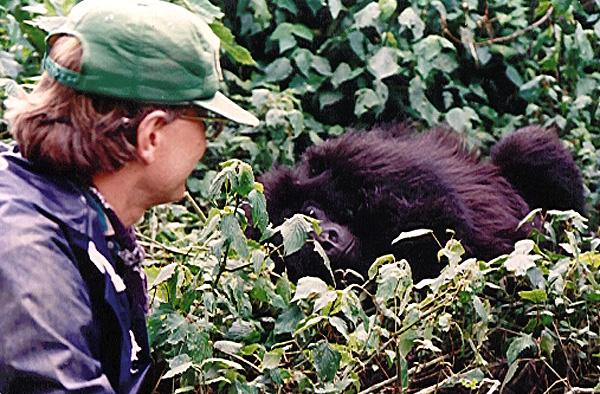 There are three countries in the world where you can sit down with a mountain gorilla (gorilla beringei beringei) for an hour of very unique animal viewing: Rwanda, Uganda and the DRC. This is because this gorilla’s single habitat area overlays the point where these countries border one another.

But Rwanda is the only one that most travelers should consider visiting and tomorrow I’ll explain why. First, a primer on gorillas.

There is still some controversy as to how many species and subspecies exist in the gorilla genus, which I find a bit infuriating since DNA would go a long way to settle the matter. But one of the difficulties is that the rarer version, the Cross River Gorilla, is almost never seen and may be limited to only a few hundred individuals in the deep jungles of a troubled country. So taxonomic differences today govern most field scientists’ views on gorilla speciation.

The majority consensus is succintly displayed by the World Wilfelife Fund on their gorillas species page:

4 types: 2 subspecies for each of 2 species. The most numerous is the Western Lowland Gorilla which is usually the one found in zoos and which inhabits the largest area in a variety of jungles in west Africa. WWF is reluctant to number them, but the Gorilla Fund believes there are up to a 100,000.

You can visit habituated and semi-habituated families of these gorillas in a number of places in west Africa, but the most developed for tourists is found in Gabon’s Lopé National Park. Lopé is the most mature, regularly used preserve.

The problem with seeing this most numerous of the gorilla types is that they live in very inhospitable, hot, humid, thick jungle; and that they are the smallest and quickest and arguably the hardest to habituate to tourists. Moreover, many of their jungles are in very troubled political areas. So a lot of personal investment in time, patience and money is required to see them.

Ironically, the first of the gorilla types I ever saw is the rarest, the Cross River Gorilla (gorilla gorilla diehli). At the time we had no idea there was this rare version. We thought we were simply headed out to see the common Western Lowland.

And while it was true that even in the early 1970s there were lowland gorilla areas much more accessible than where I chose to go for my first encounter, at the time I was not interested in “easy.”

It was extremely expensive, starting with an air charter into a questionable airstrip that the plane had great difficulty getting out of. Then once on the river it took 5 days of travel by dugout canoe through heavily bug-infested 100-degree Lome River jungle.

We had to first find a pygmy group that would guide us. I was advised by the ornery, reclusive German hunter who I had found to “guide” us that we dare not leave the river without pygmy guides.

We began negotiations for a pygmy guide by catching large river rats (a type of coypu or nutria), spiking them over the largest fire we could produce safely in the middle of the jungle at the side of the river, and praying that jungle people would arrive so that we wouldn’t have to eat them ourselves for dinner.

This two pygmies did on the third evening. We traded our freshly barbecued rotisseries for their promised guiding. After the first six hours the next morning I wasn’t so sure we’d struck a good deal.

We were shown all sorts of things but gorillas: pygmy homes in hollowed out trees, giant caterpillars, toxic plants and colorful mushrooms and even what they said were gorilla footprints and gorilla meal leftovers.

Finally at the end of the day we got a glimpse of a gorilla.

The creature was racing away from us, but it did stop briefly to look back at me. Over maybe 15-18 seconds of sheer ecstasy I counted three blinkings of the eye through my binocs, and the adventure seemed worth it! But once in a bed in a hotel, I knew better than try to market this trip.

The second subspecies I saw was the Eastern Lowland (gorilla beringei graueri) in Zaire (now the DRC) in a park where they are still found, Kahuzi-Biega. Scientists are more certain of these numbers, around 15,000, because they’ve been the longest studied of all the gorillas.

Kahuzi-Biega is very close to the country capitals Kigali and Bujumbura as well as the big town of Goma which in those days had a very functioning airport. It’s a very small wilderness surrounded by heavily populated areas and Lake Kivu, so it’s hard for the gorillas here to migrate elsewhere. Perforce they’ve been habituated for a long time.

On my first visit in the mid 1970s I had to plow my way through 30 Italian tourists throwing watermelon at the apes. This was very disturbing but apparently routine in those days.

I finally figured out when the European Sabena charters weren’t arriving, and returned often, once taking a National Geographic photographer to photograph a silverback.

The great irony was that after a dozen or more visits to Kahuzi-Biega, I finally learned of Dian Fossey’s work in nearby Parcs des volcans where the presumed rarest of all the gorillas lived, the Mountain Gorilla (gorilla beringei beringei).

My first visit was somewhat on the sly, since the formal Gorilla Project which would do so much good in the area and so beautifully organize the visits had yet to be formed. It was just me and the old hunter from Kenya who Fossey had contracted to transport her back and forth from Nairobi.

In May of 1979 EWT sent the second properly certified tourist at the invitation of the Rwanda government and with a Rwandan ranger up the volcanoes to see this most beautiful of the gorilla species, but he never got to see them. Fossey shot at him.

Then there were fewer than 300 Mountain Gorillas. Today there are more than a thousand and they represent one of the greatest, most successful tourist/conservation partnerships of all time.

Now, the concept of “wild” has been necessarily compromised with the Mountain Gorilla. Few creatures on earth have been studied so intensely. Every baby gorilla born today must be inoculated against measles, for example, just like a baby child, because a tourist once transmitted the disease to the animals.

I’ve now personally completed 30 treks into Parcs des volcans, about a dozen to the wilderness area in the DRC and about 20 from Uganda all to see the Mountain Gorilla. Tomorrow I’ll explain why Rwanda alone is where you should go to do so, today.