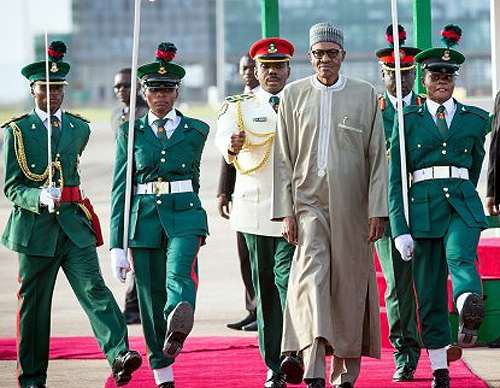 For the last decade Nigeria’s GDP has been the highest in Africa exceeding $1 trillion in just the last few years. It has more than half as many people as the U.S. but an area only about a tenth as big.

Nigeria’s history since independence from Britain in 1960 has been a dosey-doe between democracy and military rule. Today a former general is the president of a democracy, but the rumors are growing that won’t last much longer.

“We are constrained to let the cat out of the bag,” a top military commander said today in the typical African way of saying something you shouldn’t. “Some military men are making moves to remove [President Buhari].”

The current President, Muhammadu Buhari, understands this better than most. Although he was freely elected last year as President, he had also been the Head of State for two years in the 1980s after leading a coup against the then democratic regime.

Yes, that’s what I said. The man who forcefully toppled democracy on New Year’s Eve, 1983, was freely elected its democratic President on May 31, 2015.

The longest and most damaging civil war in modern Africa was the Biafran civil war in Nigeria from 1967-1970. Only 15 years into independence, Cold War headaches were disrupting Nigeria’s polity, famine appeared in 1968, and the better educated and democratic Biafran was feeling increasingly oppressed by the growing non-secular, autocratic government that favored the Islamic north.

That was almost a half century ago. It’s happening all over, again.

The Nigerian economy is in a free fall with the price of oil, its soul fuel. The world Battle Against Terrorism is playing out in its northeast. Climate change is decimating its agriculture, and the better educated and democratic Biafran is feeling increasingly oppressed by the growing non-secular, autocratic government that favors Buhari’s Islamic north.

“We were quarrelling with our brothers, we were not fighting an enemy… Somebody is saying that once again: he wants Biafra. I think this is because he wasn’t [yet] born” and doesn’t remember the horror of the war.

Agreeing with British Prime Minister David Cameron’s recent statement that “Nigeria is fantastically corrupt,” one of the leaders of the modern Biafran secessionist movement said yesterday:

“”Nigerians … have blood in their hands. They are ethnic bigots, unrepentant dictators, religious fundamentalists and arch genocidists. They are arch supporters of terrorism. They circumvent the electoral laws… They do not understand the basic tenets of democracy… These are men whose only mission is to annihilate their perceived enemies.”

This deputy leader of the Biafran secessionist movement is too young to have experienced his last civil war, but he’s certainly hell bent on another one.

As we know all too well here in the United States, democracy gives you the right to lie. Many of these lies are believed by the electorate without due diligence. An absolute lie becomes an unmitigated truth, and the resultant battle has clearly drawn borders: Right-vs-Wrong.

But real democracy rarely creates thoughtful policy that is neither wholly right or wholly wrong, and that reality flies in the face of the easiness and sanctity of believing something is truthful or a lie.

The gun replaces the vote. Some strongman takes over, and at least in the beginning of his reign he brings with him something all people pine for: peace.