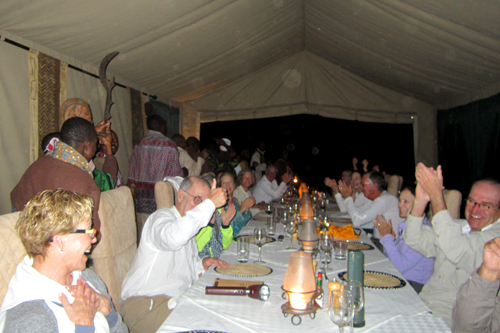 African travel companies are rethinking their ebola policy, putting their money where their mouth is, and offering unconditional refunds.

Embracing science and the history of past ebola outbreaks, companies mostly so far in East Africa are advising customers that deposits will be refunded without penalty if WHO declares an outbreak in an area in which they operate.

WHO’s designation, “outbreak,” differs from isolated cases of the sort experienced in Dallas and New York. An “outbreak” is multiple confirmed cases in separated, multiple areas. There is no history or other evidence suggesting that isolated cases lead to outbreaks.

Among the first this weekend to change their policy was Great Plains Conservation, which operates three luxury camps in Botswana and three in Kenya.

“Many of our guests are really worried about Ebola. One can’t really blame them given the media hysteria surrounding the story. We believe this will sort itself out in time as the world mobilizes to tackle this head on,” Jacqui Usher explains as the lead-in for the policy change.

The Great Plains policy will refund all monies held – no questions asked – if an ebola outbreak occurs in Kenya or Botswana.

Moreover, Great Plains has now announced that even if there is no outbreak, customers can get all their money back within 16 weeks of arrival. Most African camps require an up-front, nonrefundable 15-20% at the time of booking.

And within those 16 weeks should a customer grow weary of coming, Great Plains will roll any monies held for the customer to new booking dates up to a year in advance.

This is the gold standard of sensible ebola policy. This is spot-on reasoning, bold marketing and honest communication with consumers. No legalize or other lengthy pontificating qualify this extraordinary situation we currently find ourselves in: a hollow fear of something that will simply not happen.

Yesterday in Mwanza, Tanzania, the blood tests of a man who had died suspiciously of symptoms identical to ebola tested negative for the virus.

The possibility, though, that the man had ebola had spread like wildfire through this large Tanzania city on Lake Victoria last week. Health care workers responded in force, a public health campaign was initiated, associates of the man were quarantined and even if the man had tested positive, the spread of the disease would have been stopped in its tracks.

The Mwanza response is what is lacking in West Africa, and the reason that the disease is still spreading there.

Great Plains may be the gold standard and the first company to play it straight with consumers, but it has been resoundingly joined by others:

“Gamewatchers Safaris understands travelers’ sensitivities about planning a holiday almost anywhere in the world during an Ebola outbreak,” Jake Grieves-Cook, former head of the Kenyan Tourist Organization and now owner/operator of Kenya’s Gamewatchers Safaris explains in the lead-in to his new policy, which is similar to Great Plains’.

Great Plains and Gamewatchers were among the very first, but by no means the only companies to announce revised changes, yesterday. It’s going to be very difficult, now, for any African travel company to sit on its hind and not join this sensible movement.

And the result? Consumers will be assured that the African travel companies really believe what science and medical experts have been saying all along:

Ebola is hard to get, and relatively simple to stop spreading except in very unique areas like the three countries in West Africa just ravaged by generations of war.