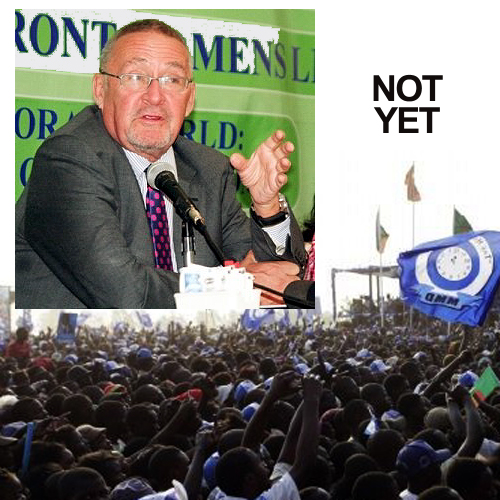 White fear of black in America is profound but black fear of white in Africa is even more profound.

Currently of Africa’s 53 countries, only one is being led by a white man, and that came as a great surprise to most in the world, and in fact, to him.

Guy Scott was a close friend for many years of the president of Zambia, Michael Sata, who died early yesterday morning in a London hospital.

Scott’s Ph.D. in agriculture, his birth in Livingstone and his outspoken dedication to remaining essentially unmeaningful except as a symbol gave the former president all sorts of political hedges and foreign notice.

So Sata’s rise to power was never without Scott at his side, and much of Zambia saw this very unusually blended team as just what the country needed four years ago. And so it proved so.

Not because of what Scott brought to the team, but specifically because what he didn’t.

Many vice presidents around the world have no power. It’s a peculiar anomaly of the executive type of democracy that the man designated to replace the dead leader has so little to do or say until that tragic moment comes.

Yet it comes quite often. Presidents of democracies have a very high fatality rate, and not just from assassination. Many don’t achieve the position until they’re quite old and sick. That was the case with Sata, and many wonder if certain Zambians allowed Scott to be put on the ticket as vice president for that very reason.

African executive democracies are almost all much more executive than in America. Each time Sata left the country, he had the power to appoint an acting president, and it was never the white face.

In the last several years Zambia like many African countries has been actively implementing piece by piece a new constitution. Zambia moved faster and faster as Sata got sicker and sicker, but Tuesday the race ended with Sata’s death.

One of the pieces currently up for consideration would eliminate the requirement of the old constitution that limits the president only to persons whose parents were born in Zambia.

Among the reasons this is so contested is because Michael Sata’s son, the very popular current mayor of the Zambian capital of Lusaka, was born to a Sata wife from Malawi.

The mayor, known commonly only by his first name Mulenga (just to avoid muddying the waters), is technically no more eligible than Scott to run for president, but he commands a very powerful political wedge in current Zambian politics.

Scott was born in Zambia in 1944, but his parents were born in Scotland. The Sata/Scott team headed a very popular political party in Zambia, brought to power in no small part because of anti-Chinese sentiment that swept over this fairly industrialized country the last few years.

Chinese investment in Zambia is as intense as anywhere in Africa, but the Chinese ran into hurdle after obstacle when trying to quell the power of Zambian unions.

In his recognized lack of power, Scott often remarked disparagingly about the Chinese as the perfect mouthpiece for his powerful boss. What Scott said was presumed to be what Sata believed, even as Sata negotiated more and more Chinese investment.

They were a perfect team.

The moment Sata died and Scott was confirmed the interim president yesterday, Zambia’s incessant talk of coups heated up:

“…it is a period for the people of Zambia to reflect as to whether this is the kind of constitution we want [or one] that could provide a different scenario all together,” Scott’s African lawyer told the press yesterday in what many consider setting the stage for a herculean political battle.

Sata loved Scott but not so much his son, Mulenga, who hates Scott. The political opposition hates them all, and their leader has already announced he will run for the president.

In my opinion Scott isn’t qualified to be any country’s leader. His crass remarks about Chinese and his oft-stated support for the neighboring and ruthless dictator, Robert Mugabe, disqualify him in my view. He served a cute purpose for a while.

But also in my opinion a white face couldn’t make it yet in any African country. This is where America stands above Africa: Obama may be facing some of the most racist obstacles to governing of any man alive, but he did ascend to highest office.

In Africa, not yet.