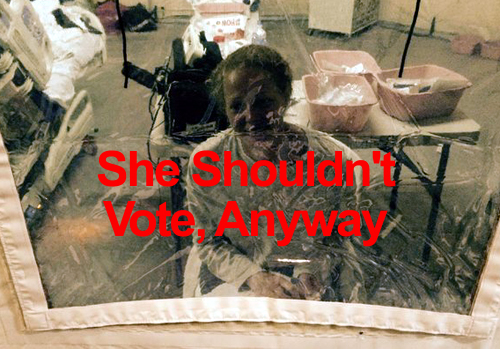 The depths to which some Americans have descended in an hysterical attempt to protect themselves against ebola has become immoral.

The airport quarantines of health workers arriving from West Africa is dead wrong. It will impede the health services and trade, which West Africa must have to recover, and many more people will die.

In a worse case scenario, the situation which had become better will slide into worse, and the threat to Americans will increase substantially. The policy is self-destructive.

Then why is this happening?

Politics. American politics has become so corrupt our democracy is now impotent. The electorate has lost the ability to analyze issues and is controlled by false claims and fearful media.

Yet they walked in lockstep to solicit their electorate’s hysteria, because they are all about to lose power, and they are getting votes however they can.

Of course their actions reveal an electorate – if they’re correct – that’s slum ignorant. Are you truly so ignorant? Or like me, do you feel helplessly manipulated?

My own governor, Illinois Pat Quinn, is no angel but I did plan on voting for him as “the lesser evil.” His challenger, Bruce Rauner, is no alternative for a progressive like myself.

So I now have no choice but not to vote for either. This is hardly democracy at work.

But it is at least myself acting on the truth that I know:

The four governors that enacted this barbarian policy are killing people in West Africa and not increasing the protection or health of their own citizens.

In fact, the policy endangers their own citizens’ health and well-being.

This political act against self-interest is what has been happening to America for a generation. Whether it is the senior voting to end Medicaid or the food server voting to end a minimum wage, Americans have been brainwashed with a thousand false ideas to act against what they know is best for themselves.

And now this toxic social personality threatens the lives of thousands.

Facts be damned. Scream don’t think. The man will do anything to stay in power.