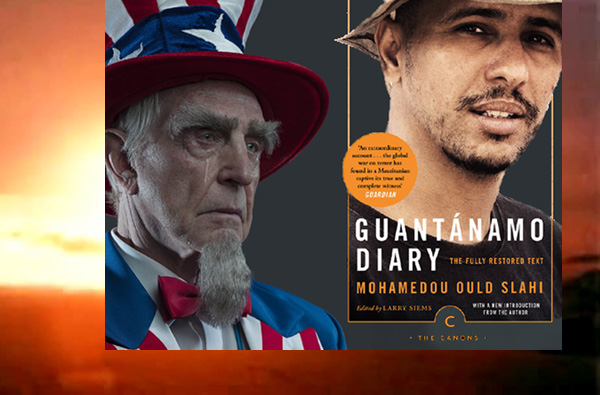 The release last week of the unredacted Guantánamo Diary is a terrifying reminder that America is destroying itself.

How apt at the same time a gun fit leaves 26 dead outside a little Texas church, world climate talks open with three competing US delegations, South Koreans boo Trump and announce they wish to arm themselves with nuclear weapons, and two more cabinet secretaries purge themselves.

I’m not sure we have until the midterms.

Mohamedou Ould Slahi’s Guantánamo Diary was published more than a year ago. It achieved more sales worldwide than any other single book referencing America in 2017. Though translated into 22 languages, the original book was incomplete.

Guantanamo officials took Slahi’s manuscript and blacked out about 10% before it went to publication.

Safely returned home to Mauritania, Slahi has now published an unredacted version after painstakingly replacing the black magic marker with the truth.

Slahi’s case is not radically different from many who have been held at Gitmo. He was totally and completely innocent; almost a case of mistaken identity. It took 14 years for we Americans to free him, and in the process, we tortured him and broke ourselves.

There are parts of the diary which are boring. They happen to be, by the way, some of the parts that were redacted:

“I noticed an ant walking up the wall, and then many more leading and following her. I learned to follow ants in the Mauritanian secret prison, watching them until they left the cell and me behind. I watched this one climb, going about her daily business and not realizing the drama that was unfolding before her very eyes.”

In a literary sense, or for followers of E.O. Wilson, this might not be boring. But one of the crazy things to be learned by reading both versions of the book is that the redacted parts – other than sometimes naming names – were not at all crucial to the story.

Mauritania is not a nice place to live. Slahi seems to be basking in his global celebrity at the moment, so he may be somewhat immune to the heavy censorship and brutal police presence in the country led by a coup victor in 2009. So note one: Mauritania is a safer and more comfortable place to live for an unassuming writer who reveres the United States, than the United States.

Note two: Redactions are mostly meaningless. Apply this lesson to all the other redactions our government undertakes in the name of liberty, from the JFK files to Mueller indictments.

Note three: Gitmo is unconstitutional. Worse, it’s unAmerican. It remains as nothing more than a symbol of American hypocrisy and misjustice.

All that seems left of normalcy is the press, and because it’s overloaded with material, it too shows signs of stress. But it’s holding together. The rest of America is not, and very soon we’re going to start feeling it.

Just cross your fingers that Mauritania doesn’t place a travel ban on Americans.