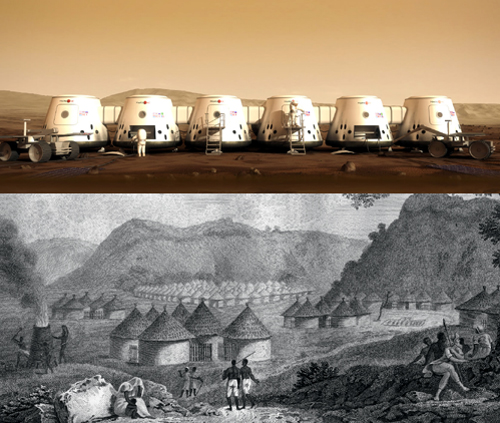 MarsOne has all the makings of the Africa Association and might just be mankind’s next great exploration.

Revolution was stirring across the globe, a sort of Arab Spring. The major powers were preoccupied with managing a tech boom as well as numerous wars. Distant and unexplored parts of Africa had their attention but not their passion.

Arabs had been the real explorers. They knew much of interior Africa intimately, but they lacked good map making skills. They dominated slaving and ivory harvesting, but they lacked the ships for transport, which came from the Europeans. With few exceptions they worked individually with little capital like bounty hunters in the wild west.

Several major powers including Britain, Spain, Portugal and France established coastal outposts in West Africa by the early 1700s. They wanted to control or at least regulate the growing slave trade. Their vying for territory in Africa mirrored their rearrangement of Europe as former fiefdoms and tiny kingdoms began to form the countries we recognize today.

Europeans excellently charted most of the African coast during the 16th century but very little was known inland more than 10 or 20 miles. The few explorers who ventured inland died of strange diseases, complained of deathly climates and hostile savages and for some reason lacked the wherewithal of the Arab slavers and ivory hunters.

Competition among European powers, though, forced their reluctant leaders to invest in Africa. By the mid 1700s Britain had a dozen trading stations in interior West Africa.

The furthest and controversial Pisania station was 200 miles up the Gambia River. The managers were to monitor the slave trade, keep their eyes on the Arabs and develop new commerce in palm oil.

But Britain had no passion to find out what lied over the next hill. Revolution was brewing in its colonies across the Atlantic. India demanded most of the colonial office’s resources, so Africa was left to private companies to develop.

Enter MarsOne. MarsOne is Dutch created and managed. So was Cape Town, Jakarta and New York.

“MarsOne will establish a permanent human settlement on Mars. Crews of four will depart every two years, starting in 2024. Our first unmanned mission will be launched in 2018.”

According to an MIT group studying Mars One half of the first set of explorers will die enroute Mars, the costs will be exponentially greater than the organization predicts, and “it’s not really feasible under the assumptions they’ve made.”

Very similar remarks to King George’s Prime Minister, the Early of Bute, about the group that later became the African Association.

Lord Bute was right, by the way. When the Africa Association raised the capital and government license to explore West Africa, nine of its first ten explorers died exploring the Niger River.

It wasn’t until the formidable Mungo Park in 1795 successfully went beyond the Pisania Trading Station and returned to tell about it.

Recently MarsOne chose its first 100 explorers. I listened to one interviewed by Chris Hayes this week.

Women, too, of course, because all the missions will be … one way.

One advancement mankind has made in the last several centuries since Mungo Park sailed down the Niger is to better predict outcomes. In those early African days explorers were often driven by notions of the divine, or of their heroic and legendary personal heritages.

Mungo Park and the dozen explorers who died preceding him knew their chances of returning were slim, but actual probabilities were much harder to ascertain. Mungo Park’s main concern wasn’t the chances of running out of food or fuel, but of overcoming fear.

Many were motivated by the rewards of success, the book deals that in the 18th and 19th centuries were like worldwide movie contracts. I don’t doubt there are some in the MarsOne 100 who are similar.

But the MarsOne folks have a lot more data to sit on than Mungo Park did. They don’t wonder if theirs might be a one-way journey. It is. So whether they die on the way, or die there, they will never come home.

The MIT study is packed with much more science than the drawer-full of old Arab maps and stained notes of early explorers held by the African Association. Yet to me it still reeks of the obdurance of Lord Bute’s plaintiff appeals to King George III to forget about Africa and those “unknown worlds,” accept the 1763 Treaty of Paris and concentrate on making life better in Edinburgh.

Thank goodness there are still humans in this world with the passion to explore and the bravado to tempt the unknown. More than ever today we need a belief that there is so much more out there than our troubled selves.