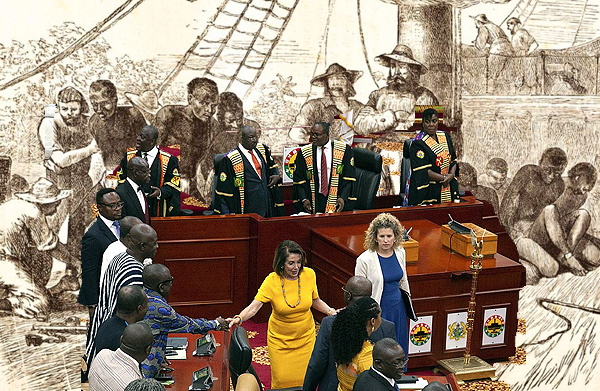 Twelve black American Congresspeople and two white ones led by Nancy Pelosi addressed the Ghanaian parliament yesterday. “We know our forebears did the abominable to you but we must also bear in mind that there is nothing we can do about what happened in the past.”

She didn’t say that. That was said by an important Ghanaian politician to the delegation.

Four hundred years ago sometime early last month the modest Portuguese caravel, the San Juan Bautista, limped into Veracruz, Mexico, having horribly navigated the Gulf of Mexico managing to miss all the islands much less Jamaica which was the captain’s destination.

One of its three lanteen sails hung limply, ripped apart by a terrible storm at sea. The top third of its pole mast was split nearly in two. How the captain must have rejoiced when the lookout in the Crow’s Nest shouted, “Land Aho!”

He ordered the remaining two sails lowered so haphazardly that the weary ship tilted violently, almost sinking. Somehow, though, it managed to coast slowly towards the beach to finally end the 3-month horrendous voyage from Angola. Many of his crew were dead. Most of the remaining, including himself were seriously sick. All were starving.

But before the old man touched land the notorious British pirate John Jope commanding the modern war ship named the ‘White Lion,’ together with his partner the wealthy privateer Daniel Elrith who commanded the even more impressive ‘Treasurer’ built with a writ from the Earl of Warwick, intercepted the Bautista, killed what was left of its miserable crew, and confiscated about half of the 100 slaves in its belly.

They took only half, because the other half was dead.

Elrith’s ship was greater but Jope’s ship was faster. They split the booty including the human cargo and raced for the American colonies.

Jope showed up first, about 400 years ago exactly.

Without waiting for the normal invitation by local British authorities, Jope moved quickly into Point Comfort which later was named Hampton, Virginia, just across the James River from Norfolk.

The British colonel in charge of the port immediately contained his anger when he saw enough of the pirate flags to know it was Jope, and that Jope was Elrith’s partner, and that Elrith had connections to King James.

The townspeople, however, were not so mollified. They hastened down to the dock surrounding the British colonel protesting he had not engaged the militia. More than several unwanted British privateers were docking monthly, avoiding taxes and bringing all sorts of miscreants into town.

The colonel did then herald a few soldiers, but not to delay the ship’s docking, to keep the settlers at bay.

Among the townspeople was John Rolfe, the colony’s secretary and spouse of Pocahontas. He sympathized with his fellow settlers but he performed his paid duties for The King honorably: Rolfe duely registered the ship along with its commercial cargo, “20. plus and odd Negroes.” Rolfe was discreet. There were probably at least 50.

What thought John Rolfe? It was known that these black people were being sold as slaves in the Caribbean, and there had been animated conversations in the pubs and carriage houses about how useful they could be to the farmers who were constantly desperate for help.

I can only imagine that exact moment when Rolfe or others of the townsfolk looked upon the sick and starving blackness being raised from the belly of the caravel. There had to be some compassion after initial revulsion at the inhumane state of the human.

Was this the moment that we rationalized slavery? We would tend their wounds, fill their bellies and wash their putrid skins… in return for their souls? How easy it must have been at that moment to feel like a savior of the slave.

And so it continued. Child labor and prostitution in the slums of the dirty cities, for if not wouldn’t the kid die? Sons of Liberty dressed up as Injuns for that moment of violence.

“The legitimate powers of government extend to such acts only as are injurious to others,” wrote Thomas Jefferson, the owner of 600 slaves who were not “others.”

The Jackson massacres, the Trail of Tears.

April 22, 1889: 50,000 white people lined up waiting for the noon gunshot “bringing civilization” helter skelter over the sacred lands of the Cherokee. The Battle of Bad Axe and the treaty-flaunting wars preceding it in which a young lieutenant, Abraham Lincoln, fired his first military shot. He missed.

Benches for whites and benches for blacks. Teachers for the privileged and debt-laden overworked single mothers for the denied. Food stamps for the poor and frequent flyer miles for the rich. Votes for sale. Lies for Liberty.

Americans are champions of rationalization. Did it all start that one day at Point Comfort 400 years ago?

“But we must bear in mind that there is nothing we can do about what happened in the past.”