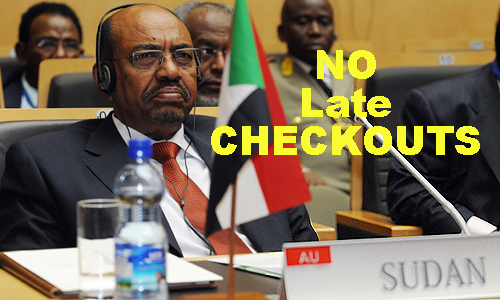 One of the most difficult things for anyone or any thing to do is cede control … to give away your authority to someone or something else. South Africa did that, today, and the United States in an identical situation in March refused to.

In my estimation, this makes South Africa more modern, more moral and presents a future more promising than the U.S. The world is becoming increasingly interconnected and interdependent upon every part of itself.

A global society with ultimate authorities will some day be an absolute certainty. The societies which embrace this future and now work towards it will be the movers and shakers in it.

Those who refuse may decay.

But minutes before the order was issued, Bashir jetted out of the country.

Bashir was in New York in March for the opening session of the United Nations. Although numerous organizations and individuals petitioned various U.S. courts to have him arrested, no court issued a warrant because the United States is not a signatory to the World Court treaty.

So he stepped onto a world stage and addressed the opening as all World leaders are allowed to do. He legitimized his ruthless rule. Obama could have cooperated with the World Court, even without a formal treaty, but he elected not to.

The situation in South Africa was not without controversy. Before The Court ordered his arrest, it ordered that he not leave the country while it deliberated the case.

The current government of South Africa headed by President Jacob Zuma was caught off guard, as it has continually been throughout Zuma’s troubled reign.

Having little choice but to play with the court that, in fact, has kept Zuma somewhat immune to the ramifications of his scandals, the South African government aruged that Bashir was technically not in South Africa, but in the nether world of the Africa Unity Summit, and therefore South African laws didn’t apply.

The Court adjourned for an hour at noon South African time after a morning of deliberation. In that hour Bashir was sped away from the summit in a black limo to a nearby South African airbase, where his plane’s engines were running.

He leaves behind him another Zuma scandal: Zuma heeded the call by the Court to deliberate the question, but essentially just ignored the earlier order to keep Bashir in the country until a decision was reached.

Bashir is under indictment by The World Court for crimes against humanity mostly in Dafar.

On Friday, the South African government urgently appealed to the court in The Hague to rescind their arrest warrant while Bashir attended the African summit.

Saturday, The World Court refused and a local South African court then ordered Bashir to remain in the country while it deliberated on numerous motions from South African citizens.

It’s not uncommon for Heads of State, including George Bush, to avoid international travel because of fear of being arrested in a foreign country.

Bush and Cheney avoided travel to Canada and Switzerland shortly after the end of the Bush presidency because of numerous lawsuits filed against them for the fraudulent war in Iraq.

Bashir has avoided almost all travel since being indicted, this because the majority of the world subscribes to the World Court. In March, however, he traveled to New York to address the opening session of the United Nations, having received assurances from the Obama administration that he would not be arrested.

The U.S. is not a signatory to the World Court convention, as virtually every African country is. Moreover, the Obama administration believes that peace in South Sudan is critical and dependent upon Bashir’s cooperation.

At the time, The World Court, which is a child of the United Nations but technically no longer linked to it, requested the UN to arrest Bashir. Ban ki-moon declined, answering that he lacked such authority.

It was a terrible travesty of human rights that Obama and Ban ki-Moon allowed the ruthless dictator to address the world assembly.

It’s arguably a greater travesty that President Zuma picks and chooses which court orders he will obey at home, but the overall situation and outcome in my estimation puts South Africa as a whole in a much more moral situation than the U.S.

Accepting authority is never easy. But without a world authority in the near future there will be no authority for anyone.