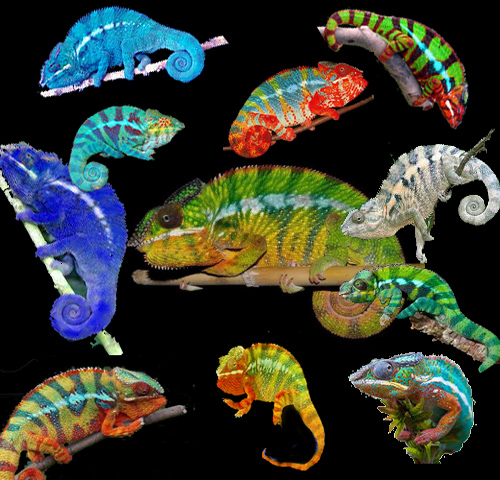 Fascinating field research in Madagascar has finally explained a long-held mystery about panther chameleons: there’s more than you think!

Panther chameleons are very likely among the most popular reptile pets in the world, particularly in America. They’re native to northern Madagascar where their habitat is seriously threatened, but there are so many pet panthers in the world and so many breeders the species was not considered threatened.

But this crafty little creature might have fooled scientists, after all!

Field scientists from the University of Geneva, working on a hunch motivated by a curious practice of the commercial reptile breeding trade, are suggesting that there’s not a single panther chameleon with lots of different colors.

For years chameleon breeders and commercial traders have known that chameleons of different colors ought not be mixed up:

“Due to the extreme color differences of the species, we use locale info to identify the wide variety of panthers. This helps in keeping locales pure when breeding and avoids unwanted crosses,” is one breeder’s subtle way of saying don’t mix and match. You won’t get any little creatures tapping around your breederie if you mix red with blue. “Unwanted crosses” probably have never happened in the pet store.

For years and years no one’s questioned this mystery even though it’s been well understood that color differentiation is geographical.

It seems to me that this could have been a high school science project, but it’s taken all this time before adult scientists finally decided to test the hypothesis that color differentiated species.

It does. Two drops of blood from each of 324 panther chameleons across the upper part of Madagascar revealed in DNA analysis 11 separate species of creatures.

“Each of the new chameleon species requires individual management, given that they each constitute a different part of the biodiversity of the whole,” Prof Milinkovitch chides scaly pet owners around the world, and he’s right of course.

His report goes on to suggest that the harvesting of panther chameleons from Madagascar, which the government currently caps at 2,000 annually, needs to be more minutely regulated, as certain of the species might be in more trouble than others.

On the one hand this is a marvelously wonderful story that expands even more our understanding of Madagascar’s incredible biodiversity.

On the other hand the government of Madagascar seems incapable of stopping the entire deforestation of its island nation and it just emerged from a long period of violent civil strife. Who’s going to care about these little guys, anyway?

Remember, every new paint that you add to the mix makes the color duller. Remember that curious grade school fact: mix all the colors together and what do you get? White, how boring!