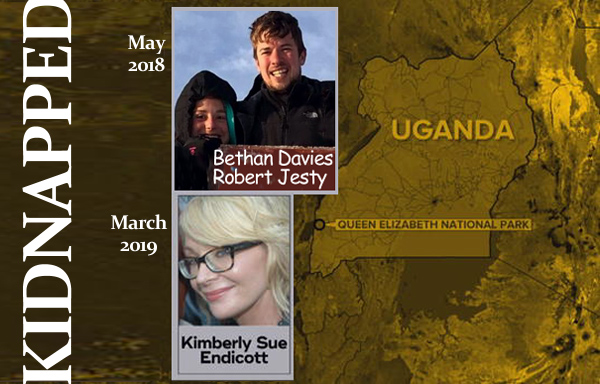 When blood boils you need to take in a very deep breath of crisp, cold air. That’s what I’ve been doing ever since the story broke Sunday of the “rescue” of kidnapped American Kimberly Sue Endicott in Uganda together with her Ugandan guide.

Blood boils with the heat caused by screams no one listens to: I’ve been telling people for years not to visit Uganda and in particular where Endicott was kidnapped. Two young Brits were just kidnapped in that area last year! What’s worse?

What’s worst of all is that the western press ignores the major story, that the extraordinary ransoms regularly paid by kidnapped tourists is causing a maelstrom of local black human being kidnappings, for the pitifully minor story of the kidnapping of one bamboozled tourist.

According to Global Voices, “At least twenty-five [local] people were kidnapped over the three months [Mar-May 2018]” during which the international press only reported on the two young Britts’ travails.

So it’s hard to organize all this when I feel so frustrated. Obviously I empathize with the two Britts and one American kidnapped in the last year and for all sorts of reasons I feel enormous relief they’re free. I’ve been kidnapped myself. My daughter was almost kidnapped in the same place when the kidnappings began 20 years ago.

But what do we have to do to warn people not to visit western Uganda/eastern DRC? Clearly government travel advisories don’t work, anymore. Over the years government advisories about travel have been so compromised by politics that most are rightly viewed with enormous skepticism.

How do we get even the white American to sympathize with the black Ugandan as much as their “own?” A life is a life, folks!

And how do we get Americans to crawl off their pedestal of self-importance to recognize that a half million dollar ransom paid to free a Californian is absolute proof that dozens more Ugandans will now be kidnapped?

So what would you do?

Kidnapping has become a regular state of affairs in this area of Uganda/DRC for at least two decades. Endicott told the LA Times that part of her dream Uganda trip was to see the mountain gorillas. She was kidnapped near Ishasha in the southern end of Queen Elizabeth National Park during a night game drive. You couldn’t scheme a better situation for kidnapping.

Last May two young Britts were kidnapped in an area that’s a hop-skip-and-a-jump from where Endicott was taken. Bethan Davies and Robert Jesty were traveling in The Congo with arrangements by a company called Wild Frontiers.

So take a very deep breath of crisp, cold air and move over a notch: let’s say for some otherwise unbelievable set of circumstances Ms. Endicott believed she had well researched her trip (although failing to discover about all the violence and kidnapping in the area or of which companies still don’t have kidnapping on their rostrums… much less, by the way, occasional ebola).

What do you think that means?

It’s a great value to visit Uganda! Because it’s cheaper?

Sometimes, you get what you pay for.