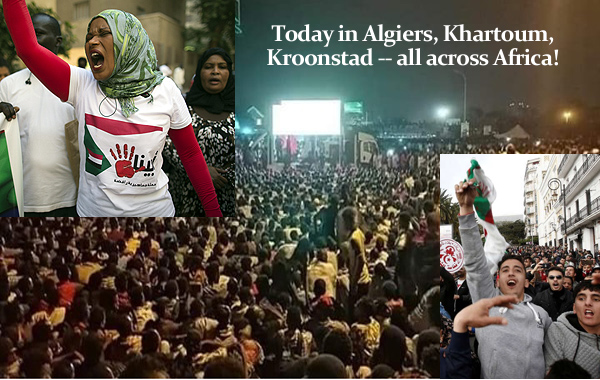 Elections, 0. Popular Uprisings, 3 (or more). Are we experiencing a new Arab Spring? Or better, a new Human Spring?

Popular uprisings in The Sudan, Algeria and South Africa are creating governments that align with the will of the people. Elections in the UK failed to achieve Brexit and so misconstrued the will of the Britts that it’s comic. Elections in the U.S. were called not by a majority vote; so they were never democratic to begin with. Elections in Israel reaffirmed the power of one of the vilest men ever to run a country. Democracy as it’s been known for a century or more is failing. Street protests, especially in Africa, are succeeding.

Westerners are terrified that they might have to do more than tick a box to express their will. This laziness allows such manipulation of the will of the people that western governments today mostly don’t reflect their constituents’ preferences or even core beliefs.

For thirty years there were no true elections in The Sudan. The army officer who was brought to power by popular uprisings began his reign well enough, redistributing wealth, suppressing corruption and massively increasing education. Half way through his tenure he stunned the world by agreeing to end a civil war by creating a new and separate country, South Sudan, from what had been a third of his terrain.

But years into his regime his core ethnicity overwhelmed the successes that he had achieved for his people. He orchestrated genocide in Darfur. He began feathering the beds of his family and friends.

So when Omar al-Bashir too often and for too long ignored the will of the people, the people came out in the streets. As they did when they put him in power three decades ago, street protests have toppled al-Bashir. But protests continue this morning, because the people aren’t yet satisfied with what has so far replaced him. They will succeed. History is on their side.

Algeria is a stunning example of the new world, today. Outside observers have always certified its elections as free and fair, as by most standards they have been. But for 57 years ever since the people evicted the French in a bloody war, a coterie of certain families known as “the pouvoir” has “won” every single election easily.

This is because even better than in America, even before America’s sick concept of political PACs, the Algerian elite knew precisely how to manipulate democracy:

The rich controlled all the media. The business moguls controlling the country’s only but huge source of funds, oil, leveraged their trump card whenever there were any signs of defying them. And the military, the defacto heroes for getting rid of the French, glued it all together.

So remarkably when the current 4-term president stepped down and his constitutional replacement announced “free elections” the crowds in the streets only grew exponentially. Today the chant is “No new elections!” No pablum democracy. Only freedom and the will of the people.

South Africa finally got rid of its Trump last year. The cleanup has been tedious and intense but transparent and better than many had expected. Yet today across that country in smaller urban and rural areas, cars are burning in the streets, workers are striking and the country is very close to coming to its knees. Why?

No African country has as long a democratic history, or as convoluted one as South Africa. Perhaps no country in the world has such a body of law created by democratic processes. While America is still suffering Trump and much of the rest of the world is still grappling with racism and dangerous nationalism, South Africa has moved beyond that: No protestor in South Africa today inveighs against the national government.

The South African protests as widespread and serious as they are, are all about local matters as varied as city money allocated to build a mall or tax credits to attract business or child care facilities in local schools. The protests coordinated nationwide as “Total Shutdown” are about hundreds if not thousands of specifically local issues.

The South Africans succeeded cleaning house at the national level, and their washing-ups are now trickling down into every tiny hamlet of the country. Elections loom but ticking the box may be moot, now: When it’s over this country is going to be exhausted beyond belief, but a new dawn may arise.

There is an inspiring, wonderful and uplifting commonality to all these movements: they are all non-violent. These aren’t terrorists or militias or participants in a civil war. They are the epitome of Dr. Martin Luther King’s strategy to effect change.

The new dawn, the new world order or whatever you want to call it, is right now this moment! being created. It will be considerably different from the past: It will actually express the will of the people. Look to Africa for guidance. But don’t wait for a ballot to be handed you; that will be far too late.