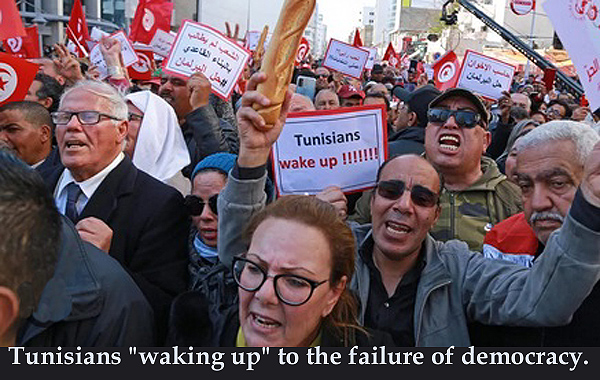 This massive political and social retrograde is happening because democracy is seen as having suffocated economic development. Too much talk and not enough action.

These three words strung together move your eyes to the next post, the next page, the next room. Can’t we just forget about all of this for a while? Aren’t things going OK, anyway? Why all this negative stuff.

Tell that to the Tunisian school girls, the relatively large LGBT community that has developed since the April Spring, the maverick anti-mullah grandmas who dare to claim they’re more spiritual than religious leaders, the leaders and parishioners of Judaism’s oldest synagogue in Djerba.

Tell them that a return to autocracy that will imprison and even execute them for their beliefs is just fine.

There’s little we can do about it, anyway.

Tunisia is about the size of Wisconsin with a 12 million population like Ohio. It’s one of the oldest places on earth, the seat of pre-Greek Carthage. France annexed it to its African empire in 1881 then benefited from its advanced culture and deeply artistic society.

Seventy years later in the chaotic European desperation following WWII France engineered a hasty independence by turning it over to a dictator: Much easier than a longer transition to the democracy which would have better representative actual Tunisian culture at the time.

And except for a couple brief interludes Tunisia remained a highly autocratic if not totally dictatorial society until 2010.

During France’s colonial rule Tunisian culture was forced to take a big back seat to capitalism, the motus operandi of almost all European colonization of Africa. This tinkered with the thousands of years of Tunisian stability based mostly on its culture and arts, not its GDP growth.

By independence the divide between the rich and the poor had exploded exponentially, reflecting what happened in almost all democratic societies after WWII. Problem is that the poor in America or Europe usually aren’t poor enough to get and die of cholera. In Tunisia that became routine.

The country was primed for this capitalistic cleft. It had a stark class society originally based on ancient land ownership. But the western obsession with capitalism monetized what had been a cultural division into an economic one.

A street vendor protesting his devastating poverty set fire to himself in April, 2010. That sparked the April Spring. There were, of course, many sparks to the April Spring, not least of which was the enormous optimism of the Obama era that had seemed to have stemmed a world economic collapse.

And in that sea of relief was released the energy of experimentation: the movements towards gender equality and explosions of free expression in the xx-Too demonstrations, the resurgence of Bernie Bolshevism tempered by Warren Wisdom.

And especially in African countries where the previous couple decades had developed a population as educated if not more so than their counterparts in the West, democracy became the be-all and end-all of great revolutions.

But these last twelve years haven’t worked out so well. The economic collapse of 2008 never fully reversed in the less than richest countries, and when some light was seen on the horizon Covid swarmed out of the storm clouds.

Last summer in what seemed like a real representation of what everyday Tunisians believe, a referendum passed that changed the democratic constitution following 2010 back to something more akin to a monarch’s charter of medieval times: Virtually all of the democratic parties and institutions boycotted the vote, but you know what that means: they would have lost.

Democracy moves a lot of responsibility from what was an autocratic State to the citizen individually. But it takes a State to foment rapid development. In Tunisia 12 years of high unemployment, a stagnating economy and growing public debt and taxes moved those wonderful Tunisian dreamers to pine for the old days when the dinner plate was kept full by girls ordered to stay home to cook.

The reversals that will now occur in Tunisia after tomorrow’s election are monstrous and not dissimilar to what has happened in Afghanistan. The outcome is given. Secretary Blinken’s statement Wednesday is like a literary dirge.

But we and all the other dwindling number of democratic societies left on earth have been put on notice: don’t let capitalism destroy democracy.