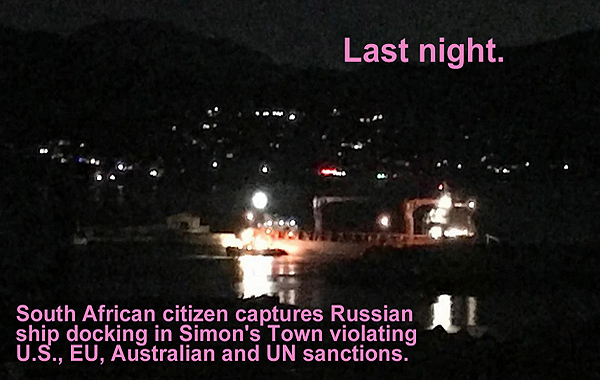 When the polls closed in Georgia last night an unusual blackout occurred at South Africa’s naval base at Simons Town.

The ship is sanctioned by the U.S. in coordination with the EU and Australia to punish Russia for its Ukraine war.

Half of South Africans are exploding with fury and half are rationalizing in unbelievable ways what may be happening. As of this writing the South African authorities haven’t commented despite multiple South African media outlets asking them to do so.

The ship had turned off its Automatic Identification System (AIS) at 2:41p SAST Monday. So publically available large ship monitoring sites like Marine Traffic or Vessel Finder were unable to confirm its position beyond Monday’s high seas position near the Aghulhas Bank, which is a typical route for ships rounding The Cape.

Almost half of all South Africans still support the convicted former president Jacob Zuma, his abject craziness, multiple wives, personal estates built from citizen taxes and belief that AIDS can be prevented by a warm shower. The party in power, the ANC, dances around him carefully because without his base of support the party which brought democratic South Africa into existence will collapse.

For every high school basketball court in Georgia filled with 300 local, shouting fans, 153 voted for Raphael Warnock and 147 voted for Herschel Walker.

There was only one possible concrete benefit to Georgians who supported Herschel had he won: Change would have slowed. The movement towards greater human rights and equality, the diminution of corporate power, the shrinking of minority power – all conceivably would have slowed down.

When Trump insulted Africa and his administration followed up with the horrendous termination of trade deals and mutually advantageous policy positions, South Africa struck an alliance with Russia, China, India and Brazil.

That alliance was financial. There is nothing in that alliance suggesting South African must support Russian adventures, although South Africa has yet to condemn the war in Ukraine.

But South Africa – or more correctly, the South Africans in power (the ones who dance around their former leader like nymphs in paradise) determined that their longevity is better served with Russia that the U.S.

Warnock beat Walker with a minute 0.8% majority of Georgia’s voters who make their voting decisions in rational ways.

Walker barely barely lost to Warnock with issueless supporters motivated by no other reason than to keep the opposition from winning, even as it could be demonstrated that by so doing they were voting against their own best self-interests (social security, human rights, freedom of speech). In other words, irrationally.

Well, it might always have been that way with politics. But the thing is that longevity was longer in the old days. Today the world is changing so incredibly fast.

Life sucks. There will always be some form of discrimination and other evils. Those who have suffered less from these believe that they are now on the brink of suffering more, and they may be right about that, but it’s coming so fast they don’t have time to consider it carefully.