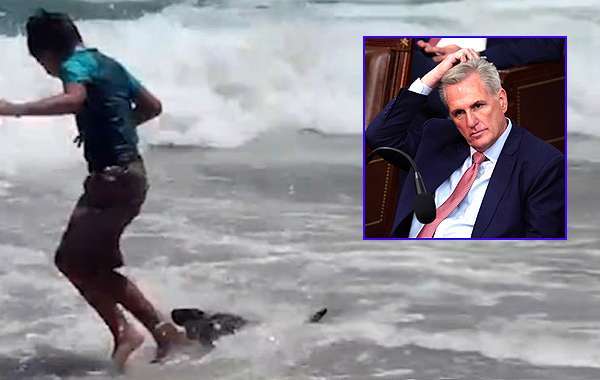 Yesterday a baby seal, about the size of a small black lab, attacked multiple swimmers at Cape Town’s popular Clifton Beach. I’d come down exhausted from watching the House disaster, in need of several items of ordinary African news. And the first I found was this.

The seal first attacked a kid, then an older man rescued the kid and got attacked, then the lifeguards blew out warnings but one woman didn’t notice and the seal really bit a chunk out of her until a guy grabbed it, swung it around and then threw it back out to sea… where it immediately turned around and swam back to attack him.

So what’s next? Robins poking out my eyes?

Or … two giant superpacs with unimaginable amounts of money and no interest in human welfare rescuing Kevin McCarthy from abject humility by coming to an agreement on what type of person should get funds to challenge an election.

Frankly, I don’t see much difference between the agreement and the baby seal.

It isn’t just our political institutions which are dysfunctional. Climate change has crossed the threshold where hopeful deniers can claim normalcy. I nearly froze to death two weeks ago (my kitchen pipes heroically offered proxy), then two days ago donned my favorite T-shirt for a stroll down my street in 50 degrees.

Those of us who rate our sanity at normal or better are making a huge mistake by reveling in the last two years and pointing to what wonderful “ordinary order” was enjoyed. The last two years were ours because of extremely thin majorities (maybe 50,000 votes) in a bunch of contests in which almost 112,000,000 citizens voted.

For the importance of maintaining sanity, that percentage is not very reassuring.

We saw last night grown men and women carrying on the January 6 insurrection. We’re doomed if we continue to believe they are anomalies, in the same way that the folks on Clifton Beach just couldn’t imagine that little animal would ever hurt them.

But before the suicide of the nihilists comes their wanton destruction. Our cute little bunch is hell bent on bringing down the government and I’ll bet you dollars to donuts that if not in the next couple days then in September when the debt ceiling won’t be increased.

Our two years of peace and joy will have long before fallen out of the rear view mirror. The derecho of another turbulent, dysfunctional election will be building in the west. We will say tranquilly to ourselves, “This is no surprise.” Yeah? So?

I’ve never realized so starkly before how connected everything is. Such a realization is the understanding of fate: A baby seal in Cape Town and a Long Island Congressman who can’t even prove his name in an institution with a very important seal that is right now useless.

It’s fate. One didn’t cause or was created by the other. They’re just two crazy things like quantum events destined simultaneously as proof we’re displacing gravity.

Our grips on “ordinary” anythings are slipping away fast.