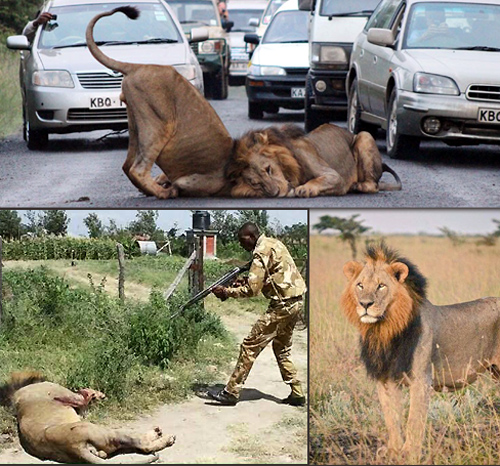 When a wild animal kills a person, should it be killed?

Kenyan park rangers killed the lion Mohawk last week after he killed a man. But zoo authorities in Palm Beach didn’t dispatch the tiger that killed its keeper.

The protocol especially since the days of the Man-Eaters of Tsavo has been to kill any wild animal that kills a man. Presumption: it likes the taste.

The 35 or so lions that live in Nairobi National Park are very unusual. Their territory is strictly defined — something truly wild lion would never accept — and many, many photos exist of these lions testing this limit otherwise known as Ngong Road.

Rarely yet nevertheless captured on at least 200 cell phones at the same time, the lion stroll out of the forest onto the street during rush hour! Cars stop – which they do routinely in Nairobi’s rush hour anyway – and the lions pad their way down the highway for a while before returning to the forest.

Last week one of these celebrity lions attacked a man in a market and was then shot by a ranger.

Mohawk it was, indisputably. His name comes from his unusual hairdo (naturally, by the way, not as sculpted by Nairobi mall professionals). He had wandered ten miles out of the park, the opposite direction of Ngong Road.

Mohawk traveled out of the park onto a prairie which more or less begins a massive wilderness that stretches into the great Tanzanian parks of Ngorongoro and Serengeti. But then, he made a sudden left turn and strutted into a very distant suburban/rural town called Isinya. Truly wild lion would never strut into a town but Mohawk’s a celebrity. He needs people!

The rural people of Isinya aren’t like the Benz-driving, hipster Galaxy Tablet crowd commuting on Ngong Road who need increasingly imaginative excuses for being late too work. Maybe the farmers of Isinya weren’t quite as “enthralled” as the young execs in Nairobi? Nobody took his picture? So …Mohawk killed a man!

And rangers then killed him.

Half way round the world at about the same time a much larger cat bit the neck of its young woman keeper.

Authorities didn’t kill the tiger but tranquilized it, and so it took up to five minutes before medics could untangle the cat from its prey.

The multiple investigations now going are specifically targeted to the question whether the keeper died while waiting for the tranquilizer to take effect.

In my opinion both cases are the result of humanizing wildlife, which we snobs prefer to call “anthropomorphizing.”

Mohawk directed traffic. He posed at last count for more than 100,000 photographs. His death is now a Twitter hashtag, #JusticeForMohawk, there was a Memorial Service for him, and today’s opinion page in Nairobi’s major newspaper vilified the public for not giving wildlife enough space.

And … was trying to save an endangered species justification for delaying saving a human?

These should not be the enigmas they seem. If we didn’t think then treat wild life with human considerations and affection, if we accept the common sense that because wildlife cannot save us but we can save wildlife that we are more important, then we might move out of this fairy tale universe of pirouetting hippopotamus and friendships between warthogs and hyaena into the reality of ecological wonderment.

By believing we “love” the lion, we never really learn what a lion is. We bury its awesome behaviors and biological complexities under notions of humanness.

Humanizing wildlife invites them onto highways and disarms their keepers. Flash: Don’t try, Mohawk didn’t have a Facebook account.