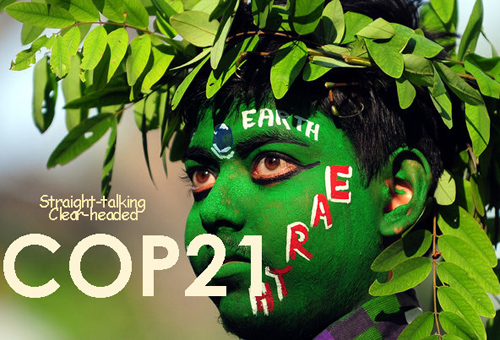 Today on Earth Day only one major head of State (from France) attends the signing statement at the United Nations of COP21, the breakthrough global climate agreement negotiated in Paris last year.

French President François Hollande is the star. He was instrumental in negotiating African developing countries into the deal, but there aren’t any African Heads of State here to sign with him.

John Kerry signs for the U.S. Obama is not here as he’s telling Cameron who’s not here, either, not to leave the EU.

COP21 is good, but its worst part is another acronym, INDC, Intended Nationally Determined Contributions, that was created at the behest of the developing world and negotiated principally by Hollande.

The premise is that development cannot be compromised in the poorer countries of the world.

As Bolivia and Ecuador explained in a joint statement during the negotiations, “These climate reparations would give to economies relying on progressive extractivism the necessary resources to transition to clean energy without having to sacrifice their social and redistributive policies.”

Translate: pay us not to burn fossil fuels. The implementation in nicer language will be written in each country’s INDC.

In other words, Kenya will forge head with additional solar, wind and other non-fossil fuel methods of making power, but primarily only if Britain, the U.S. and Japan – its principal aid givers – pay them to do so.

I think this is remarkably fair. But it’s politically dicey.

Most Americans (69%) now support efforts to reduce greenhouse gas emissions, BUT … they do not believe (45%) that climate change is a “serious problem.”

That’s the same position in 10 of the major 17 countries who pushed through COP21. Only in India, Germany, Canada (only barely, 51%), Mexico, Brazil, Italy and France does the public accept that climate change is a “serious problem.”

So that’s how dumb the world is, and that’s why Hollande is at today’s signing ceremony. France, he is saying, is not as dumb as America or China where (get ready to scratch your head) 71% of the public supports international treaties to reduce greenhouse gas emissions, but only 18% believe that climate change is a serious problem!

I would love for some data from Africa, but except for South Africa (56% support reducing greenhouse gas emissions, but only 45% believe climate change is a serious problem) polling in other African countries doesn’t exist.

You see if you stripped out the motive for reducing greenhouse gas emissions, climate change, then what replaces it?

In developing countries it’s pollution. Pollution is as much an issue in Nairobi as Beijing.

In the developed countries it’s … what? Support for fracking? I just don’t know.

Here’s another take. It’s likely today that most Africans, and maybe even most Americans, recognize that climate change is real. Whether you elevate climate change to a “serious problem” is the key.

There are so many problems in Africa with greater priority, like food and water and poverty, that even if it’s plausible climate change contributes to these, it isn’t as important so the moving goal post of “serious” might not be reached.

Alas for the straight-talker Trump and the clear-headed Sanders, our only solutions to sweeping away the detritus of obfuscation?