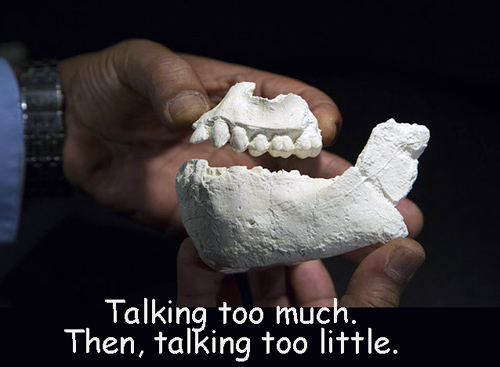 Remarkable disarray at the moment among paleontologists, a virtual Guy Fawkes day for creationists.

Findings about homo naledi, continuing excavations at Dmanisi, even a new thesis that dinosaurs started to die before the meteor struck have just been waiting for something for creationists to exploit. Well, they got it.

Last October the respected journal Science published evidence that our closest ancestors didn’t migrate out Africa into Europe, but rather, migrated out of Europe into Africa.

In other words, white men came from white ground.

Here’s the point: it was wrong, a “bioinformatics error” according to the authors.

But now the authors are refusing to retract it, claiming instead that their original thesis was “not affected.”

That would be true if the original thesis had not been quantified. But the headline on the original research, “First ancient African genome reveals vast Eurasian migration,” is totally and completely and absolutely wrong.

“Vast” it can no longer be. There is indeed evidence for this tantalizingly fascinating “reverse migration” of some early men, but it might just be itty bitty.

Since the “respected” journal “Nature” has not decided yet whether to publish a retraction, it’s clear that all science is treading compromised.

I don’t see any disarray in paleontology, quite to the contrary. What I see is growing evidence that our previous models were far too simple.

The greatest taxonomist of all times, Ian Tattersol, recently explained it this way in Discover Magazine:

“In the 1990s, on the family tree of hominins, we had maybe 12 species. Now there are 25…. The family tree is even more bushy than that, but people are still trying to fit things into pre-existing categories.”

Things get bushier and bushier all the time, and that’s exciting and reflects how fast science is advancing. The fact that new research at Dmanisi suggests the first early man migrant was habilis not erectus, or that dinosaurs started to die out before the meteor … that’s all wonderful news for those of us who have always believed that paleontologists were reductionists.

It’s understandable. Galileo thought that the sun was the center of the universe even as he recognized himself as a heretic for his radical discoveries.

The problem occurs when a mistake made is not fully owned up to.

We aren’t splitting hairs, here. Research is not just in the neurons of scientists. It is the culmination of their thinking, of course, their toil and tools and neutral computer analysis, but it’s more than that.

It’s what it says it is.

“First ancient African genome reveals vast Eurasian migration,” is incorrect. It needs to be retracted or restated and republished and not sugar-coated in self-aggrandizing hyperbole about “what we really meant.”