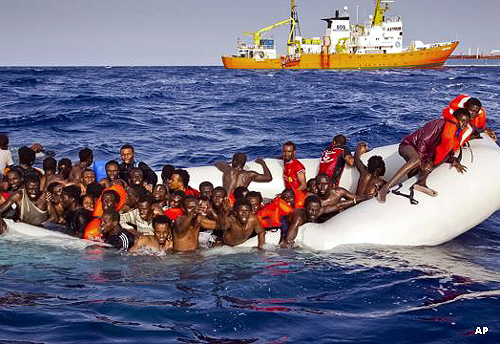 The Somali war began in 1993; Ethiopia’s various versions of terror started in 1979. Yesterday, more than 450 mostly Somalis and Ethiopians drown in the sea when their refugee boat capsized near Greece.

It seems this is the first large “migrant” incident with mostly East Africans.

I don’t doubt that many of those on board led lives as tenuous as those fleeing Syria. Over many past decades we’ve grown calloused to the sufferings in Africa. Many westerns think it’s just a “way of life” for Africans.

But on the other hand there’s no actual fighting or bombing in Ethiopia right now. Particularly why in Somalia – where it’s more peaceful than in the last 30 years – are people taking these huge risks now?

It’s simple. Europe has opened its heart, since it was unwilling or unable to open it’s military hanger. Europe is passing through a period of great guilt and it’s a piece of melancholy but hope as well for mankind.

Another reason is that ever so slowly East Africans are amassing bits of wealth. Under reported almost to the point of immorality, every migrant you hear about or see flailing in choppy seas has paid upwards of $10,000 for the chance of making it to Europe.

Many Americans couldn’t wrestle up that cash. Syrians were a rich people. Doctors, lawyers, professionals of all sorts compose the migrant diaspora.

Last August I wrote fondly of a young, educated and professional Somali refugee who made his way all the way to South Africa.

The risks he took were manifest and he undoubtedly had quite a stash of bribes available.

Now, the prospect of reaching a welcoming European coast despite all the tragedies we hear of daily is worth a man or woman’s life savings and possibly, life.

We’ve got to understand this story. We’ve got to think about why someone, anyone – anywhere in the world – would leave the place they were raised or born in and risk everything, that they would pay the equivalent of a roundtrip business class air fare from New York to Sydney to be packed into putrid suffocation on a rickety boat likely to capsize in high seas.

It’s not so far fetched to imagine a Latino American citizen, a professional with some wealth and status, fleeing a Trump America.

But how would they get over the wall?