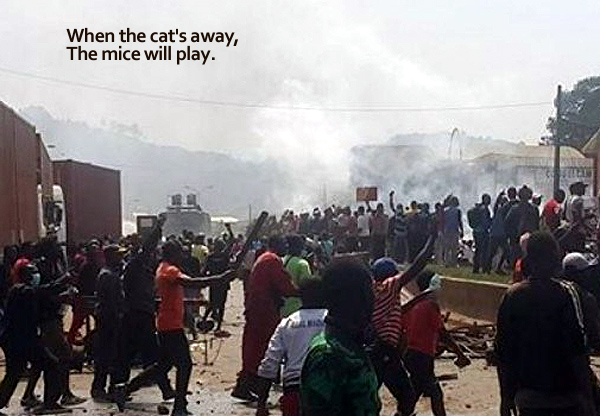 When the cats away the mice will play. In this case the mice are multiple emerging nations like Myanmar, or Zimbabwe and Cameroon in Africa, countries with a record of citizen abuse but which have no strategic interest to world powers. The cat is the west, Britain and the U.S. mostly.

Since Brexit followed by Trump, these abusive countries have become more so. They’re being left “to their own devices,” devil-be-damned. Cameroon is the best example.

“I write to you in hiding and with so much fear that at anytime, anywhere, I can be picked up by the police or military and immediately tried for felony for just sending this email.”

The country of the Cameroon in central Africa is probably the most horrible place in the world to be at the moment if you speak English. Endless demonstrations met with horrible brutality have left hundreds dead and injured. There is martial law and curfews, but the violence against Anglophones won’t end.

President Paul Biya is no friend of human rights, having transformed the country’s constitution during his first term in 1982 to effectively allow for his rule-for-life. Only the nefarious dictator Robert Mugabe has served for longer.

But Biya’s behavior has been more governable than Mugabe’s. Mugabe has essentially check-mated South Africa into supporting his regime, which South Africa has done for decades and to the tune of billions of dollars.

This because South Africa fears the refugee crisis that would ensue if Mugabe lost control of its neighbor. It’s similar to China’s support of North Korea.

Biya has no such buffer. His neighbors are beset with their own serious problems, not least of which is Boko Haram. So Biya has been held more or less in check by aggressive diplomatic initiatives often led by Britain, France or the U.S.

It’s no coincidence that one week after Trump was elected, Biya began the most onerous, racist crackdown in Africa since Darfar.

Because of the great atrocities of the colonial era, Cameroon includes two widely different groups of people that are divided not by tribe or religion as language. The Anglophone part of the Cameroon is the south and northwest. The rest of the country is Francophone.

The country has had only two presidents since independence in 1960. The first, Ahmadou Ahidjo, was a Muslim leader who was deeply unfair to the French Catholics who gave independence to French Cameroon in 1960, so he persuaded the Anglophones of the then British Cameroon to create a federation in the hopes of consolidating his power.

Problem for Ahidjo was that there just aren’t enough Anglophones compared to Francophones, even in the poorly named “British Cameroon.” He lasted for 20 years until he was quietly ousted in a coup staged over a number of months by the Francophone Biya.

During Ahidjo’s 20 years in power Anglophones benefitted enormously both in terms of government and business and at the expense of Francophones. Biya is a Catholic Francophone. The divide was clear. Game on.

As with many newly installed dictators there was a short period of benevolence during which Biya gently tried to raise the Francophone society from its oppression without too seriously impairing the Anglophones. Success, though, is an elixir dictators crave. It didn’t take long before Anglophones were being serious discriminated against.

But their British heritage and 20 years of protection under Ahidjo couldn’t be wiped out quickly. So it has been a systematic repression, if you will. In November it took a giant leap forward.

Biya has had plenty of time to ensure that the military and police are mostly Francophone. Now without Big Power concern, just since November he has closed Anglophone educational institutions, confiscated Anglophone businesses and jailed Anglophone journalists, politicians and activists. And this time, neither Britain or the U.S. seems to care.

It was no coincidence that a few days before Trump’s inauguration Biya shut down the internet in the Anglophone areas of the country as well as most of the phone service.

I’ve never believed that America should be the policeman of the world. That doesn’t mean it shouldn’t forcefully champion human rights, which it has done for nearly my entirely life time, Democrats or Republicans in power.

We are no longer. Britain and France are tied up in their own dilemmas. Expect more of this as the world grows more dangerous with more and more evil is unleashed.