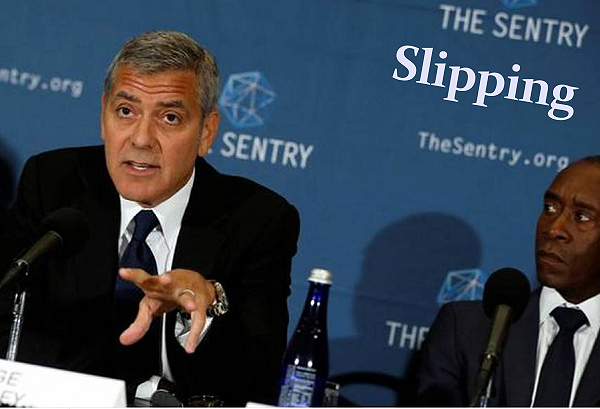 I’m sometimes inspired by celebrities’ dedication to progressive causes. But George Clooney’s analysis of the South Sudan crisis – his personal cause – is shallow and has become counter productive. He should tone down his involvement.

Six years ago I asked you readers if Clooney’s approach to the South Sudan would help or hurt. I’m afraid time has proved the latter.

Last week Clooney wrote an op-ed piece for the Washington Post which should have been a mea culpa but was instead a rationalization for the growing disaster in the South Sudan.

Much of the area of equatorial Africa is currently suffering a mega drought. The situation in the South Sudan is worsened by civil war stoked by strong, ancient ethnic racism.

“In South Sudan today…there is no accountability for the atrocities and looting of state resources, or for the famine that results. Billions in U.S. taxpayer dollars have supported peacekeeping forces and humanitarian assistance already…But nothing attempts to thwart the driving force of the mayhem: the kleptocrats who have hijacked the government in Juba for their personal enrichment.”

This is dangerously simplistic. It may correctly depict the surface of an ancient complicated situation but provides no satisfying insight into either the real depths of the problem or its possible resolutions.

Politicians round the world for a number of generations have been immorally self-serving. It’s a travesty that the current global upheaval in politics reflects. It is not unique to the South Sudan, and it’s a long ways from being the South Sudan’s main problem.

There are thousands of us who understand the situation better than George Clooney. We don’t pretend to have his field experience or catalog of details relevant to the immediate situation; he has dedicated a good portion of his time to this issue. We share his goals, a peaceful and just South Sudan. But Clooney suffers from the same malaise as Rex Tillerson and Donald Trump: a narrow conceptual approach that believes remedies are unique to the immediate visible problem, less linked to global issues and completely detached from deep historical dynamics.

I think that a main problem is that the forum available to celebrities obfuscates or entirely bypasses the intellectual vetting that ideas normally pass through. Oprah’s funding African education was not questioned as it would have been had it been you or I doing so. The public persona of goodness or effectiveness of celebrities trumps the necessary and difficult creation of good policy.

So when they overstep their expertise more harm usually ensues than good. It’s as true with Clooney and the South Sudan as it was with Oprah and South African education and is with Trump and Great America.

It’s hard to be critical, because Clooney’s soul and pocketbook is in the right place. But his training and expertise is not, and that’s what celebrities must concede. They’ve not spent their lives 24×7 developing the skills or the networks of other experts required to effectively deal with the world’s intricate problems.

I understand everyone’s frustration today with “the system.” Sometimes even I think the time has come to blow it up. But when you look at what bothers us about “the system” it definitely is not the technocrats or bureaucrats or specialists who know their field as well as my mechanic knows a Subaru Outback.

I can’t fix my car. My neighbor can’t fix his computer. When politicians overstep their expertise and drive policy unconnected with the complicated details of the issue, it’s like driving my Subaru without the bolts that hold the drive shaft together.

And now it’s become absurd: Celebrities are taking over politics.

Celebrities have built their support on the faith of their followers, not on actual technical accomplishments. Their study is usually of personalities, not of the complexities of issues. Because they lack expertise they reduce issues to absurd simplifications. There’s no chance complicated problems can be solved this way, and worse, the problems then increase.

The world is multi multi-dimensional, far too difficult for any of us to understand alone. I should not try to fix my crankshaft. My neighbor should not try to adjust his BIOS. Clooney should not pretend he knows what’s wrong with the South Sudan, because it will distract maybe millions of people away from the understanding that the problem is deeply complex and requires incredible expertise.

What we can as individuals do is support the training and cultivation of experts. As individuals we should define broad goals and sometimes, specific missions. But we shouldn’t act like experts, because we aren’t. Without experts, the world will crash.