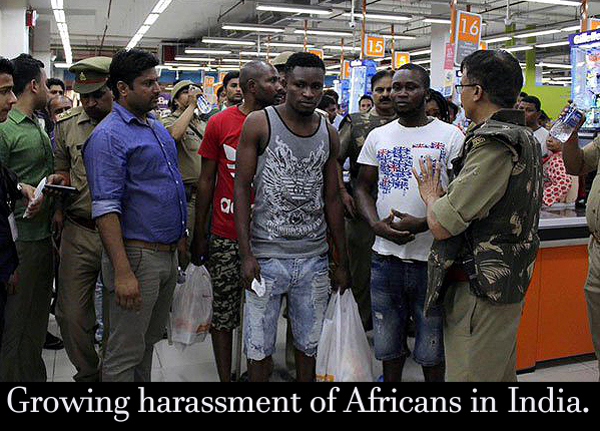 “India’s ruling Bharatiya Janata Party (BJP)’s hypernationalistic “Hindutva” ideology has found common cause with Trumpism,” writes a Kenyan commentator today. “Ultranationalism and hatred of the ‘other’ are being associated with patriotism in both India and the US.”

It began last year when a Congolese student was beaten to death in Delhi. Indian harassment of Africans increased exactly as the current leadership’s conservative Hindu party gained further power throughout the year.

Indian social media has become obsessed with displaying harassment of Africans. African students are being told to vacate their apartments, they’re being denied service in stores and roundly accused of all sorts of crimes. Social media in India today is particularly fond of claiming that the Africans run the increasing black-market drug trade.

Africans are the butt of racism in India just as Muslims are in the United States.

“This ideology is fueled by ignorance,” the Kenyan commentator continues. She points out that there is far less racial, religious or ideological differences between Kenyans and Indians than between Muslim and Americans, yet the vitriol is just as intense. Racism is exploding as the single phenomenon governing all political and social decisions.

Slate’s Daniel Engber suggests, “Maybe Americans don’t mind that Trump is racist because we’re racist, too. We live in a racist, sexist country, and Trump has given the racists and the sexists the chance to vote their true beliefs.”

Of course as demonstrated by this story it’s not just Trump, and it irritates the hell out of me the way we try to distill a social phenomenon into a single aberrant individual. It isn’t the president of India, either, or Marine Le Pen. They are just the manifestations of a terribly evil movement within all of our societies.

The Kenyan commentator, in fact, suggests that the recent incident in Greater Noida was provoked by widespread dissemination of an attack on an Indian in Kansas.

About a month ago a white nationalist murdered Srinivas Kuchibhotla in a crowded bar in a suburb of Kansas City, Kansas. Somehow the warped virulence of that story may have resulted in attacks in India against Africans!

The deep causes of this epidemic of racism aren’t unknown. They include unaddressed, institutionalized poverty; the increasing gap between the poor and the rich; globalization and climate change all leading to a deathly competition for what’s left.

None of these is quickly solvable. Even if we get our heads cleared and accept these simple understandings, remedies will take a long time.

The man who fired on dark-skinned people in a Kansas bar, or the crowds in Delhi that pummeled an African to death, or the landlords who oust innocent students do not believe they have the time to wait for remedies.