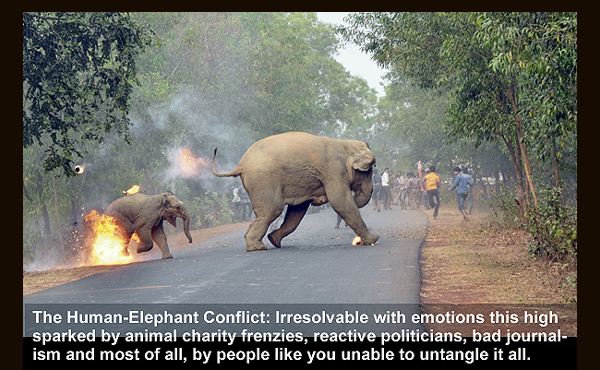 The Botswana elephant story is out of hand. Elephants Without Borders (EWB) has gone bazonkers, the Botswana government is unnecessarily defensive, October elections are driving false emotions, and exaggerated claims on all sides have damaged elephant conservation for years to come.

Animal rights activists were always easily ticked off by any poaching, but the current tense global situation has managed to raise their decibel level to unheard levels. Usually good media like the BBC aren’t telling enough of the story, thereby just making things worse.

Media like the BBC and of course EWB conveyed this as a correct 600% increase in discovered poaching, understandingly alarming many. What they failed to explain was that this represents less than .08% of the Botswana elephant population, a scientific metric that would in any other case render the fact nearly useless.

They also failed to explain that the September survey was the most thorough and sophisticated ever undertaken, so any “increase” was not a good scientific conclusion since past surveys might have missed similar numbers.

Media failed to point out how hot a political topic elephants were becoming in Botswana as this October’s national elections approached. Local politicians reacted with the same vitriol of survey supporters:

The Botswana government calls the survey “fake news,” which it isn’t, and has revoked field access to Mike Chase, the founder of EWB and main survey architect and scientist. Chase probably caused all this in the first place with his alarmist report but his removal from the Botswana scene won’t help the situation.

Only the New York Times seems to have got the story right from the start. Shortly after the September survey announcement, the Times’ headline read “Doubts Mount in Botswana Over Charity’s Claim of Elephant ‘Poaching Frenzy’”.

Quoting a Virginia Tech scientist who has been working in Botswana for as long as Mike Chase, the article contended that “the allegations of scale are imagined” and that “Western advocacy groups … steer debates in developing countries … without credible evidence.”

Annette Hübschle, a researcher at the University of Cape Town’s Center of Criminology, told the Times that the campaign was “driven by emotions, hearsay and unsubstantiated allegations.”

But I guess no one read the Times.

Chase issued a ponderous defense of his position last week, the Botswana government fired back at the “fake news” then scientifically defrocked him, the BBC took up the story, again, and even media that I respect very much in South Africa joined the chorus.

The issue is now out of hand. The good data last year that showed 87 elephants were poached has now been side-lined by the totally hypothetical and unsubstantiated claim that “syndicates of elephant poachers are now moving south.”

This is absurd. Maybe Joe and his hoodlum buddies who’d massacred successfully a few ele in Tanzania have shown up in Botswana, but this is no more an OPEC cartel moving south than an invading caravan of immigrants threatening the El Paso border.

Poaching even one elephant is bad, but as I’ve written time and again, it can be explained as a derivative of poverty and the confrontation of development that justly characterizes the numbers of elephants today as “too many.” This is a heady and difficult problem.

Which is not helped at all by the frenzy of EWB, stressed out politicians or good media being duped into yellow journalism.