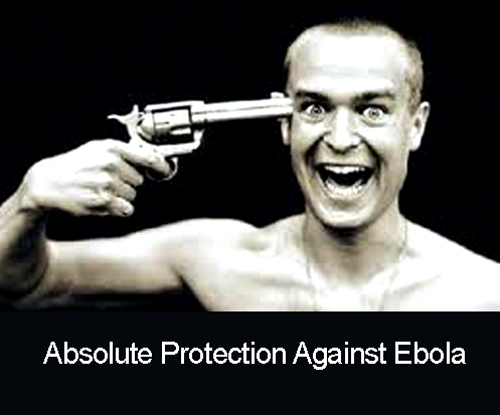 ‘Ebola’ and ‘terrorism in Kenya’ have been massively distorted by American media and not for wont of reporting truthfully.

Confused? So was I until helped by a little email dialogue with a friend. What I mean is that readers’ reactions today are so instantaneous a normal bloke can’t possibly have taken any time to think about what he’s going to say before saying it.

And in this case, saying is believing.

There’s a race to be first to react. Reaction trumps deduction. Like my old childhood “telephone game” in virtually minutes if not seconds of a media story, “facts” and “truths” have all been distorted to conform with the cultural presumptions of the reactors.

Case One: The medical doctor who is the son of the current President of Liberia.

From what I understand, Dr. James Adamah Sirleaf is a highly respected Connecticut physician, highly credential academically, remarkably generous and dedicated especially to helping the medical development of his birth country, Liberia.

He spoke freely to Wall Street Journal reporters last October about why he wasn’t giving up his life in the United States since 1990, his family, his practice and children, to go fight ebola.

In fact, he was ardently fighting ebola … for years, through philanthropy and NGO organizations that he founded and directed. His too severe conclusions about his own actions caused a maelstrom of criticism that spread worldwide.

This is an excellent smaller example of how the whole issue of ebola was distorted in the public mind.

The very nature of the disease – the fact that it is less contagious than measles or most flues; exactly how dangerous it is to societies with public health – less so than measles; and especially how and where it might be prevented – not from quarantining returning doctors … are just some of the distortions that led to this massive “Ebola Myth.”

Yet short of Rupert Murdoch’s media I couldn’t find a single initial incorrect story about it. But the perfect storm of instant reaction and dystopian, mendacious culture that gives rise to Fox News generated a “situation” that was no longer real.

I have been writing about this for decades, enough I suspect to conceivably be used by “Fawlty Towers” to return to prime time.

They’re also irrelevant because they’re often so specific that were the logic applied to some area like Kenya applied to New Orleans it would effectively end the Mardi Gras.

Over the years, they’ve also just been proved outright wrong, based on completely fallacious information. (That’s subsided in recent years.)

“Our policy doesn’t make much sense,” Gettleman quoted an American official in that article: “There are neighborhoods in Washington, Anacostia, for example, that are way more dangerous than Nyali or Diani,” he said, citing two relatively quiet Kenyan beach towns [under current American travel warnings].

Carefully, simply and logically, Gettleman explained the self-defeating power of a foreign policy to produce the very outcome it tries to prevent: a travel warning against going somewhere because the threat of calamity is deemed to high.

When I read the story today there were 64 comments. They were insane. There wasn’t one that addressed the evidence, logic or import of Gettleman’s story.

Several, for example, claimed expertness by arguing that Americans aren’t a very significant part of Kenyan tourism anyway, so why does it matter what America says? [Small minds don’t think America’s position has an effect on others in the world?]

I’m not sure I can sum up the dustbin of meaning of these disparate, illogical comments, but “JOHN” stood out because he came to exactly the wrong conclusion, “So what should Western Governments do? Urge their citizens to go to dangerous zones to spread the love? ISIS would no doubt give them a warm welcome.”

Gettleman said precisely what America should do: “… some American officials … wonder if their own government has overreacted, with possibly dangerous unintended consequences. Other Western nations… have formulated more nuanced travel warnings, highlighting certain hot spots without drawing a giant red X across Kenya’s entire coast.”

Did John not read that far? Or did John only read the comments before his?

That’s what I think. That’s the American media overdrive. A story is poorly and too quickly read, not thought about, then reblasted with tons of emotion and misunderstanding. Suddenly, ebola will have a million victims and decimate Peoria, and travel to Fiji is certain death.

We can do better, America.