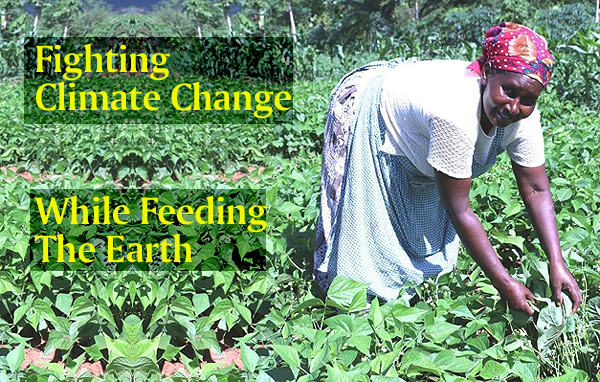 In this topsy turvy world developing countries with huge social needs like Kenya are much more aggressively pursuing organic farming and containing climate change than the U.S. Do they know something we don’t?

Yes, or stated more correctly, they know something we stubbornly refuse to see at the tip of our nose.

There’s enough food produced each year to feed everyone plus some, as confirmed by Oxfam, the world’s largest anti-poverty organization. A joint study by the University of Minnesota and McGill University showed that by 2012 the world was producing more than 1½ times the minimum nutritional requirements of every human being alive.

The problem is that food isn’t distributed fairly. Up to a billion people still go hungry with a large portion of those actually starving. Why?

First, because there is so much waste. Much of this is casual and morally reprehensible, but the fact is that a much larger portion of this waste is caused by rot, fungi.

Increased food sensitivity is reducing wanton food waste, and scientists are working on many ways to preserve foods from fungal rot.

Second, the food distribution system isn’t fair. Controlled by global agribusinesses that link food production to pesticide and GMO seedbanks, entire market segments find themselves constricted by noncompetitive practices. This is most easily demonstrated with corn. Four corporations worldwide control 75% of all the world’s grain production.

These companies are aggressively for profit enterprises. Because they’re all multi-national, they have numerous ways of avoiding significant regulation. Margins are high. Profits are good.

Finally, world conflict is one of the greatest wasters of food. It disrupts production and distribution far beyond what most of us understand.

If you believe – if you have the hope that many of us do – that the world will get things right one day, then all three of these obstacles to getting the food we already produce will diminish.

Everyone wants that to happen, of course, and many – especially in Africa – already believe it is.

Organic farming is a lower yield, long-term, sustainable solution as compared to commercial farming’s higher immediate yields and financial returns, but which in the long-term is non-sustainable.

In places like Kenya, more and more farmers are turning to organic farming, because commercial farming requires so much more capital. One of the keys to many industries that are burgeoning in the developing world is to keep the individual enterprise small.

From micro-lending to small scale digital phone production, the developing world is dividing rather than consolidating industry, and this is proving specially true with agriculture.

A benefit only recently realized is that organic, small-scale farming can actually stave climate change!

“Carbon-farming” is now the new term for organic farming.

Compost, for example, is used instead of fertilizer. Manipulating “weeds” – promoting the nondestructive ones to squeeze out the bad guys is used instead of pesticides. Both these organic techniques pull carbon out of the air in contrast to using fertilizers and pesticides which produce tons of additional carbon, principally in their production.

This is not pie in the sky. Both Hawaii and California are already demonstrating it works, and California is on track to reduce carbon emissions to only 20% of what they were in 1990 in large part through the use of carbon farming.

I often champion Africa as showing us the right path. That’s true in this case, but it’s much more practical than moral, because Africa doesn’t have the leisure to experiment with methods of production or social engineering. They’ve just got to produce food and Mother Nature is providing them with some clear first principles it would be best that we all use.