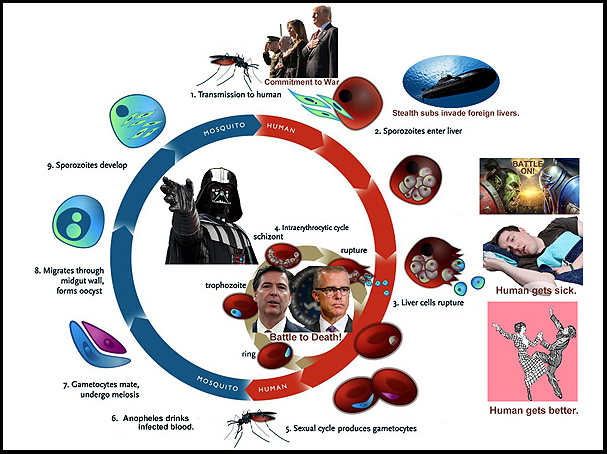 Sorry I missed yesterday’s blog. I had malaria.

The sickness, the available rapid cure and the incredible obsession Americans have with health care put an interesting bookend on my two months in Africa.

First the sickness. Malaria is one of the most fascinating human diseases. Its cycle is so complicated it actually leaves an evolutionary trail suggesting a herculean battle over the aeons between man and (little) beast.

The little beast begins as a “sporozoite,” a squiggly little protozoan like thing that grows in the salivary gland of only one type of the world’s 3,000 species of mosquitoes! The anopheles is found in many parts of the world, but not in almost all of Australia, most of central Asia, the west coast of South America and the entire bottom half of South America, and they aren’t found in most of South Africa or Namibia, America’s west or Canada or Alaska.

That’s amazing. Why? Most mosquito types have dispersed everywhere in the world. What evolutionary battle drew these lines?

The current battle round, by the way, is being won by the anopheles. Its range is spreading. This is probably due to the increased wetness caused by global warming.

The mosquito bites you and injects its saliva (which causes the bump and itch) that allows it to more efficiently suck up your blood. The sporozoite lives in the bug’s saliva.

The sporozoite races into your liver. Why the liver? There they hunker down and replicate for up to about two weeks for someone my age (much less for a child) before rupturing. The rupture is the infection, but it isn’t the classic malaria attack. That comes later.

Here’s one of the most amazing parts. Clearly in our evolutionary past the rupturing in the liver of the sporozoite for a while put malaria in the driver’s seat. That’s the infection, after all. That’s when you start feeling sick. But then the human body somehow developed disease control that overcame that, as it can with many kinds of infections.

But malaria just didn’t give up. No longer satisfied with infecting a few random liver cells, now when the sporozoite ruptures it produces two other things, a merozoite and a gametocyte. The gametocyte doesn’t do anything to us. It’s what the mosquito has to eat in order to start the whole cycle over. The merozoite are weird creatures that tear out of the liver and bore into red blood cells all over your body.

Over the next 48 hours or so, the merozoite turns into three different things, sort of like two more stages between a caterpillar and a butterfly. What’s really weird and suggests The Dark Plan hit a few roadblocks, is that twice they do it sexually and once, asexually. The buggerboo is the end creature, the schizont.

These mendacious Darth Vaders of the inner self move all through your blood stream and then decide to all explode at the same moment! Talk about synchronized swimming! This is the attack.

The battle’s on. The Darth Vaders are intransigent. They stick religiously to their schedule. It differs in each person and by age, but my attacks this time were about every 22 hours. Each attack has more soldiers, more schizonts, so more hurt.

So get in the car and go to the doctor, right?

Well, sort of. In Africa we just go to a local tabac and buy lots of malaria pills. The cure is simply a super dose of what travelers take as a prophylactic. Pretty simple. Pretty effective.

So my wife and I explained that we needed malaria pills. She was the last in our family to have malaria, and it’s exactly what she did, and the doctor gave her pills and she got better.

This time they wanted to take all sorts of tests. I get that. There’s not a lot of malaria in Dubuque. But tests for malaria are often inconclusive because the schizont – remember – bursts itself up. It’s a suicide bomber. So unless you’re testing for it during an attack, it’s hard to find.

Then they insisted on admitting me. Clearly I was sick. High fever, rambling recitations of arcane poetry. They didn’t have the medicine, but Walgreens did, so my wife went out and bought the medicine. Then they put an IV in me and did two dozen different blood tests and couldn’t figure out a thing, but I took the pills and by morning I was better.

When should a doctor trust his patient? I know it’s not an easy question, but my wife and I have been working and living in Africa for almost a half century. She’s had malaria once and I’ve had it three times, but I’ve been in Africa at least three times as much as she has.

Note: people who live and work a lot in Africa don’t – we can’t take prophylactics. The malaria “pill” is a toxic thing. If we took it all our lives we’d probably be dead by now.

I’m grateful to all the wonderful people in Dubuque who cared about me. But I seriously worry about how much time and money the American health care industry spends on other things it may not know a lot about.