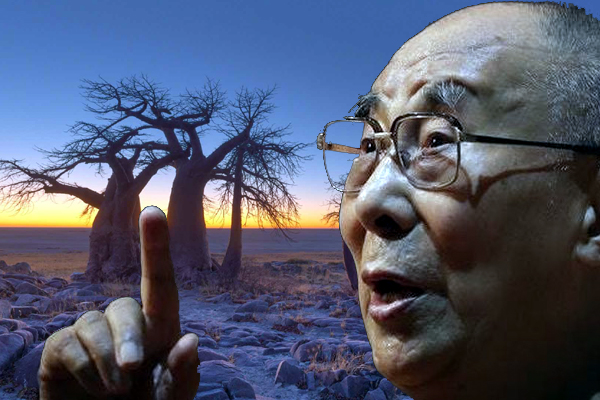 If you can’t believe the Dalai Lama, who can you believe?

This past weekend the “chosen leader” of Tibet canceled a very important visit to Botswana, a country that is increasingly trying to become relevant on the world stage relative to its increasing wealth from diamonds and rare earths. He lied about why he canceled.

The Dalai Lama is the “chosen leader” of Tibet but lives in exile since the Chinese don’t approve of him and the China controls Tibet. He is technically the same person, reborn again and again into different bodies, the Buddhist reincarnation of the one-and-only.

He was supposed to headline a conference about “Botho/Ubuntu“: A Dialogue on Spirituality, Science and Humanity” scheduled to open in Botswana’s capital Thursday.

“Botho/Ubuntu” is widely defined as an understanding that individuals are meaningless except as reflections by other individuals. Some Africans use this theory as a modern version of animism and its extensions include herbalism and spiritualism.

It’s hardly mainstream, and I think most Africans discount it as fanciful. It’s also rather hard to explain how the Dalai Lama’s own beliefs jive with it. But that wasn’t necessary.

What was necessary was that the Botswana government stick it to the Chinese.

It’s not the first time that the Dalai Lama has been used for political ends. The most recent such case was a few months ago when he visited a disputed area in the Himalayas supporting Indian claims against the Chinese.

He’s been hosted numerous times in Washington as well, by presidents to congress people. I rather doubt there’s a politician alive who embraces reincarnation.

China, of course, doesn’t take nicely to such visits.

But when China threatened Botswana with serious consequences, the country thumbed their road and dam and power contracts right back into Chinese faces. One wonders if Botswana officials believe they’ve given the Chinese a little bit too much to do in the Kalahari.

Then the Botswana government aggressively marketed this rather esoteric side show as a legitimate human rights conference. Not many serious NGOs planned to attend.

But as the speakers list developed, it became rather clear that there was no one important but his divine excellency himself. He was to share the podium with a water spirits shaman who defines himself as a peacemaker, a couple undistinguished local professors, and a few truly accomplished scientists (e.g., neuroscientist, Uri Hasson) who one would think were way out of their topic.

Conference organizers insist the conference will go on, even while they are offering full refunds for all tickets, and it’s reported other speakers are now dropping out.

The Dalai Lama is 82 years old. It’s easy to get exhausted at that age. It’s also very easy to be used and manipulated, particularly when it’s known you’ll always be around, one way or the other.