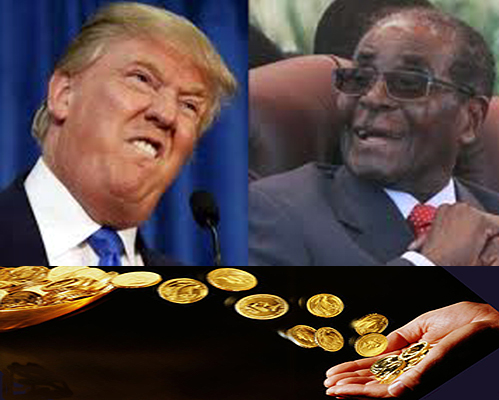 I’d love to get a hold of Donald Trump’s Christmas Card list. You can probably name some of the addresses: Philippines, Venezuela and for Africa, Zimbabwe of course. There are more but what’s interesting is that with the exception of North Korea, the leaders of these craziest states all like Trump.

And Donald Trump likes them.

The wizened but ruthless dictator Robert Mugabe courted Trump from the get-go.

Mugabe’s flattery of others is limited to not depicting them as the devil incarnate, so when he says “We’ll see,” or “Perhaps he’s not so bad,” or “Seems like lots of people like him,” it’s an unequivocal nomination for the Nobel Peace Prize.

Mugabe said all of these things about Trump before the election. After the election the praise grew less equivocal. Trump may now be the only person in history ever praised by Robert Mugabe. Monday he called the Trump administration “a gift to Zimbabwe.”

I rather doubt Trump even knows who Mugabe is, but Trump probably doesn’t manage his Christmas Card list either, and while draconian cuts in foreign aid are rippling through the rest of Africa, guess what’s happening in Zimbabwe?

In May the U.S. announced increases in aid to Zimbabwe.

The same day, the U.S. announced it was massively reducing aid to Kenya.

Explanations for both cases never fully surfaced. It was around the time that the press offices of the State Department and the Presidency were in turmoil. But the short statement that announced the reduction in Kenyan aid linked it to “failing to curb massive corruption.”

There is nothing but corruption in Zimbabwe. Kenya while certainly struggling with it is making significant progress. I can also claim with growing legitimacy that Kenya may not be any more corrupt than the United States, today.

The reason for this inversed news explanation of reality is that Mugabe and Trump are bedfellows and that the Kenyan leaders and Trump aren’t.

The Trump administration is avowedly against foreign aid and announced huge across-the-board cuts. But like any Trump vow, it’s malleable, and for friends – hey, here’s some more millions. And how do you get those millions if you want any semblance of consistency in your overall policy?

Take them from pregnant mothers and AIDS patients in Kenya, because Kenya hasn’t licked your boot.

After having been out of my country for five months since the beginning of the year, I’m astonished almost every moment that I flick on the news, but what is most terrifying is that my peers and friends seem to becoming inured to it.

If you aren’t enraged that we’re inflicting misery on Kenya to fill the pockets of a Zimbabwe dictator than there’s no hope that anything will change. (Britain and the EU, by the way, may keep those essential programs going and thereby keep afloat the idea that democracy works in Kenya.)

It’s one thing to fund evil, but we’re funding evil by defunding good. That’s a double dose of Satan.

Imagine if this single little episode, huge of course in Kenya and Zimbabwe but hardly a drop in the cauldron of American largess, is repeated a dozen times elsewhere around the world … or a hundred times. It probably is. I only follow a few African countries.

The result is to coalesce a group of evil, to fortify all the bad guys with however temporarily the resources of the richest and most powerful society on earth. Once fortified a good wall doesn’t come down easily.

The stock market is the highest it’s ever been. Zimbabwe has never enjoyed so much American aid.