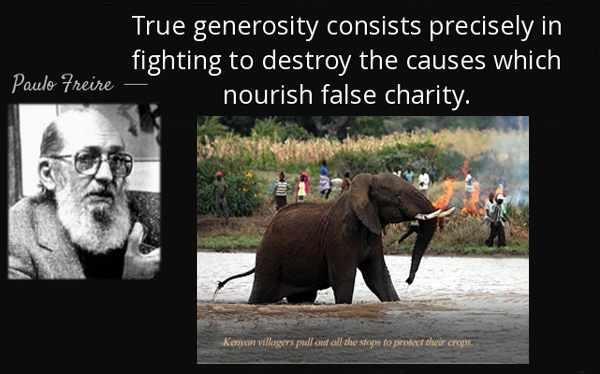 Crimes are often subjective. Elephant poachers, drug users, and teenage suicide bombers fall into this category. There are thousands more examples across a wide spectrum of wrongness.

Wednesday evening one of the most successful crusaders against elephant poaching was murdered on the streets of Dar-es-Salaam where he defied his notorious reputation with a zealous fight against poachers and brokers of illicit ivory. It’s no surprise.

PAMS was instrumental in several high profile arrests, prosecutions and convictions of notorious Dar brokers of illicit ivory. Its work is positively profiled in the Netflix documentary, Ivory Game.

I don’t think there’s any reason to doubt Lotter’s claim that his organization stopped or intervened or precluded more than 2,000 attempts to kill elephants and sell their ivory. His wider claim that PAMS has curtailed 50% of Tanzanian elephant poaching may be exaggerated.

PAMS is certainly one of the most first-instance effective NGOs in the fight against elephant poaching. But it’s not lily white. The charity rating organization, GuideStar, urges “due diligence” by any potential contributor to PAMS U.S. funding organization for its failure to properly register with the IRS and file normal not-for-profit tax statements.

This is a very mild indictment of the organization and at best it simply means that PAMS is a mostly self-funded organization operated by a zealous individual perhaps too obsessed with his task.

And that’s not my formula for ending elephant poaching.

I’ve written time and again that poaching today – especially elephant poaching – requires a much different response than that which ended the near extinction of elephants in the 1980s.

Please take some time to read my extensive reporting on what elephant poaching is today and how it might be curtailed. Organizations and efforts like PAMS only enrage an impoverished population that understandably asks why the hell so much money and time is being used to stop good men from surviving.

If PAMS claims are correct, that more than 2,000 elephants have been saved by their efforts, I’d also claim that if all the money and resources spent to accomplish this were instead simply handed out to the villagers responsible at the first-instance for this poaching, the same or better results would be achieved.

There is evidence for this.

PAMS is another example of an NGO with little intellect. It represents the high-handed, conservative black-or-white mentality that currently infects so much of the world in so many areas. Problems cannot be solved by such simplistic remedies. As I’ve so often ranted, we have empowered the ignorant, and the rich ignorant are the ones who support whole-heartedly organizations like PAMS.

It was likely a hit by Dar’s ivory mafia. Over the years Dar authorities have allowed – perhaps nurtured – a mostly Chinese operated mafia that has figured out how to buy the ivory from one-off elephant poachers in the remote bush, get it to the black market in Dar, then ultimately send it to Singapore or Hanoi.

They are an awful group of people. I’m watching closely the trial of Yang Feng Glan who two years ago I predicted incorrectly would be free, now. Eulogies for Lotter have credited him with her arrest. Read the link in this graph and you’ll see that I link it to Tanzanian politics not Lotter.

But I wouldn’t be surprised, either, if some bush sop whose attempt to fund his children’s school fees was blasted to smithereens by Yotter’s army, was the murderer.

It’s complicated, folks. Many problems are.