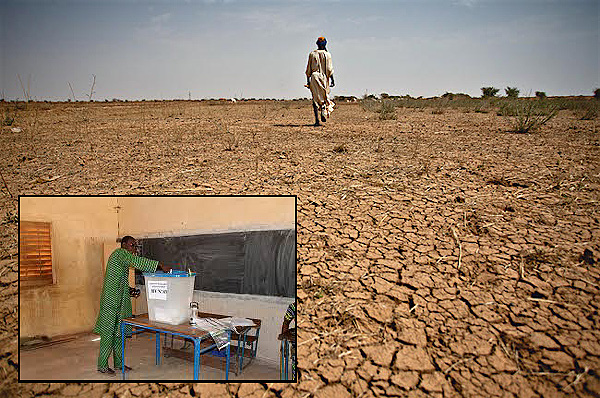 Global conservatism will fail and Mali will soon provide the evidence.

Today Mali failed running a national election. The country’s inability to foster a democratic government three years after Islamic insurgents took over the country and were then ousted by the French will force the former colonial power either to occupy the country, again, or leave it to Islamic extremists.

This is the inevitable result of climate change and global political conservatism. It is the hidden elephant in the room that will traumatize then conceivably destroy the newly emerging political regimes of the likes of Trump and Le Pen.

I don’t think there is another country in the world that better shows how the onslaught of climate change provokes revolution followed by a conservative reaction from the world powers.

Several millennia ago Mali was arguably the heart of civilization. The central city of Timbuktu was a nearly divine sanctuary for thought and innovation. Everything from engineering and astronomy to exceptional literary fiction and linguistics to exploration and map making were all coveted, drawing scholars from around the world.

Mali sits at the crossroads of the great Sahara, but for millennia and millennia the “great Sahara” was celebrated not feared. The flooding of the Niger River, like the Nile in Egypt, governed a regular and predictable cycle that fostered fulsome herding followed by rapidly developing agriculture.

There was food aplenty.

For nearly a half century, now, the Niger has declined. Exactly as with the Nile this is a combination of climate change and development:

More factories and cars, more people upstream and down using less rain that normally floods the rivers leads to food insecurity quickly followed by political instability. It’s an incredibly rapid demonstration how development powered by carbon-emitting fossil fuels is doomed from the start.

The first to feel this effect of course are the people living at the fringes of society, in this case the semi-nomadic people who live in the desert. Throughout much of the Sahara these are the Fulani and Tuareg, and they spread from Mali, Morocco, Algeria to Libya to Niger and elsewhere.

Drain their oases. Turn predictable light rain into scattered droplets, give them weapons and they will fight for their survival.

The countries of North Africa got their independence in the early 1960s mostly from France. There is a great myth in modern day renditions of African history that the colonial powers ceded control because of ideological positions regarding self government. Couldn’t be less true. Although ideological positions were often stated by the colonial power as justification, the truth was far more sanguine: colonies were too expensive.

The newly independent governments were not in a position to be democratic. There were just not enough local institutions or literate populations for democracy.

Some autocratic rulers were benevolent and some not but it led to a constant cycle of violent regime overthrows often stoked by ethnicity. It took more than a half century for this to begin to settle down and many if not most African countries to get their own real footing.

After a series of troubled regimes, Mali made a dramatic turn for the better in the 1990s with the truly democratic election of Alpha Konare. It was a wonderfully hopeful time for Mali and in fact much of Africa. Politics, economy, education – everything seemed headed in the right direction.

What was happening in Mali seemed to be happening continent-wide. Africa seemed to be recapturing its legacy. The “concert in the desert” epitomized this era. It was a modern Mali music concert that drew more foreigners than locals, celebrating the new modern music of Africa.

Then came climate change. Africa’s deserts grew faster, its rivers declined faster all while its development ramped-up to the fastest in the world.

Tuareg rebels began a successful takeover of much of Mali in August, 2003. The government resigned shortly thereafter. The 2004 grain harvest was half normal. In 2005 the World Food Programme declared a drought, which has never totally ended.

Rebel activity spread continent-wide. In 2009 Algeria forces Mali to allow its soldiers into Mali to fight the Tuaregs.

By 2012 Tuaregs freshly supplied with Islamic demagoguery and weapons controlled much of Mali. In May the new Islamic regime, the Ansar Dine, aligned itself globally with al-Qaeda and set up shop in Timbuktu.

By January, 2013, the aligned Islamic force marched down the Niger towards the capital of Bamako. What was left of the Mali democratic regime begged France to intervene and the old colonial power relatively easily pushed the rebels back into the desert, with American assistance.

France forced a peace treaty with the Tuaregs giving them greater autonomy. (This is the great joke of “peace processes” this decade in Africa. The side that “gives up” does so for “greater autonomy” when what they need is … more food.)

Despite the agreements, Bamako’s Radisson Blu hotel was bombed a year ago. Mali is once again falling into disarray. Today’s elections are less than cosmetic. France wants to get out, but doesn’t yet have a leader that will do so. She’s coming.

But Marine Le Pen and global conservatism have sewn the seeds of their own demise. Mali will be where it all happens. I’ll explain, tomorrow.