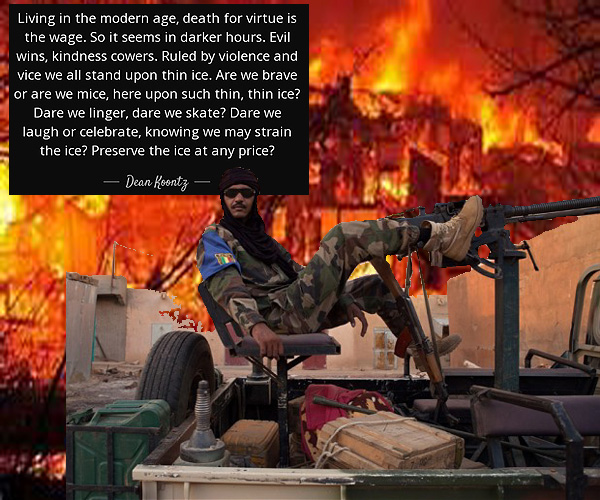 The big news yesterday about France’s election is prophetically linked to yesterday’s buried news of the collapse of Mali’s election.

Results are not yet known, they will never be, for the 12,000 local and regional Mali officials. Cast ballots were burned, stolen and even blown up by jihadists. In the rebellious north most polling places never even opened.

Yesterday I showed Mali as the quintessential example of climate change and rapid development sabotaging African society. The tragedy goes much further: Soon it will threaten France. Ultimately it will kill Trumpism.

Despairing politicos take heart: (1) Fake news can’t obscure Sandy or Matthew or the unprecedented fires in the southeast, and they are worldwide. Climate change is just too big to hide.

(2) Manufacturing jobs will not come back to the U.S., not even God will bring them back. You cannot bring back jobs robots are doing. The movement away from fossil fuels is too mature: there will be no significant resurgence of coal. Simply put, you can’t go home, again.

The global conservatism spreading worldwide is an understandable response to the quickly developing trauma of climate change and over development. These are the deep-set anxieties everyone feels, and in spite of my attempts to simplify them above, they are hard to draw out and explain.

The actual political fistfights play out as racism, misogynism, elitism and forever as economics. These are all legitimate, but they’re actually tangential to the deeper two causes.

Africa lies in the extreme of this Venn diagram, and Mali at its tip. Here’s the play:

Africa was systematically colonized by more powerful and developed countries to exploit the resources and human capital that African societies were too immature to exploit themselves.

As westerners benefited from this colonization considerably more than Africans moral excuses arose.

The table was set by Livingstone’s “three C’s:” Civilization, Commerce and Christianity.

During this epoch of empire democracy matured in the developed world. It was slow and painful and now exists in variant forms from America’s executive system to Europe’s parliamentary system. More recently the distinct line drawn between it and communism has been completely blurred by capitalism.

Whatever democracy is supposed to be, it never was in most of Africa. The emerging societies were just too immature for the west’s algorithms. This is convenient for conservative western politics which depicts immaturity as immorality, pitting under development with the sacrosanct notion of free will.

France actually faces the turning point sooner than America. Trump can forever continue qualifying what a wall means or how to spell NAFTA. Mali’s failure at self-government will devolve into more and more violence quickly, provoking a radical decision from France much sooner than America must act regarding Mexico.

There’s no in-between this time. France will either have to cut ties (Le Pen) or recolonize (Fillon). Clinton and Sarkozy are no longer around to mediate endless middle positions. The electorates are anxious.

Cutting ties effectively cedes the battle to jihadists and local dictators. Recolonization starts with reoccupation but will have to progress more quickly than in the past. The electorates are anxious. They demand quick results, easily defined in economic terms. France is capable of either situation.

Both situations fail. Cutting ties is cutting off your nose to spite your face. Recolonization will bankrupt the colonizer.

As one or other of these scenarios plays out, global conservatism dies.