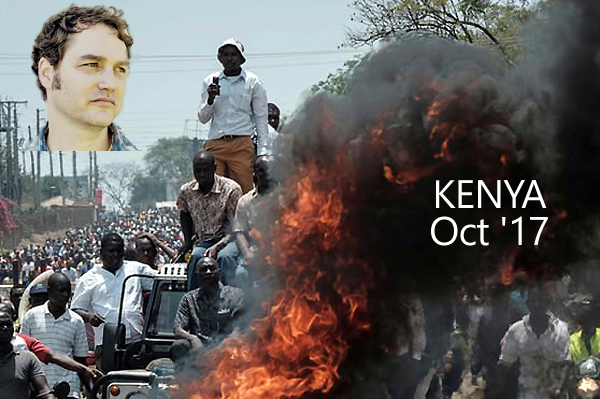 Democracy isn’t working, anywhere. South African Richard Pithouse predicted all of this in his summary of Trump’s election: “The Donalds are Everywhere.” Since that analysis nearly a year ago, Kenya, Spain, Italy, South Africa, the U.S., France, Britain and probably to some degree every democratic nation on earth has grown increasingly tumultuous.

Be prepared, folks. If you think the hurricane season is just about wind and rain, you’ve got another thing coming.

The next soonest explosion will be Kenya.

Over the weekend the rerun of the national Kenyan election scheduled for Thursday really started to come apart. The opposition candidate held firm to not participating. The government held firm with election ballots including his name. Larger and larger protests grew in typical bastions of the opposition. But worse of all, the “IEBC” – the authority in charge of operating the election – itself began to implode.

Democracy itself unraveled: One of the commissioners fled to New York after “receiving numerous threats” and because “I do not want to be party to such mockery…”

Nobody can succeed in our current environment, Pithouse explains. They will “still lose, at every turn, to fake news, bogus analysis and appeals to chauvinism by demagogues who evoke ‘ham actors and asocial psycho-paths’ because that is, precisely, what they are.”

Demagogues crack all democratic safeguards by organizing the most banal human instincts, and if there is a common single one, it’s racism.

In Spain, today in Italy — actually in all of Europe as in my own home town — the powerful label “immigration” facilitates a new kind of racism: those who’ve been here for a while and anybody else.

Racism is the first pedestal the demagogue plants himself on. Grown from it, the next pedestal is an unfair economy.

The public refrain is that immigrants take away our jobs. The backroom prattle is that they’re disease-ridden and rape our daughters. A demagogue needs the backroom prattle because there’s no evidence for the first reason and mendacious prattle coalesces the troops with such urgency there’s no time to debate the second.

So on this third pedestal the demagogue can now claim anything.

Politics is short-term. It can’t deal easily with racism. Politics is also fairly well formulated. Once the demagogue is on the third pedestel, he’s immune to politics. But politics can attack the second pedestal. It can make the economy fairer.

But according to Pithouse, attempts to rectify the unfair distribution of wealth aren’t going well:

“It is clear that aspirations for a democratic and egalitarian resolution of the crisis of capital have, on the global stage, been subject to a decisive rout.

“…Predatory elites … incite and mobilise horizontal social antagonisms to advance and sustain their imbrication with the most rapacious forms of capital… The modes of accumulation enabled under these regimes include outright gangsterism. The left…has failed.”

The left has failed. They’ve been compromised by wealth.

So yesterday evening I refused to sign a petition to put a good person onto the Democratic ticket for the next election. My petitioner countered, “So you just want to leave it to chance?”

“If there is a way out of the gathering crisis it will require the affirmation of forms of solidarity that are illiberal in so far as they insist on the subordination of capital to society.”

Let me translate: Democrats are just as mired in the soup as Republicans and changing one for the other isn’t going to change the soup. In fact, it will delay it.

Until we massively change our current political system, we will be unable to alter the inequitable distribution of wealth – today mostly governed by race and the social and economic ramifications borne of it. If the time hasn’t already come, it will very soon: Any support whatever of the current political system impedes any real change.