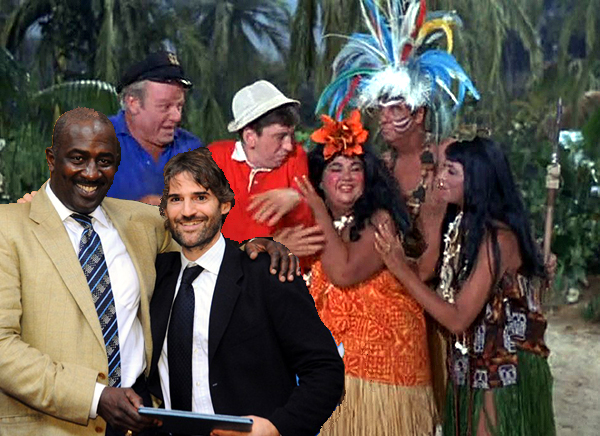 About a year has passed since the first reads of his book began. It seems he may have ruined his career. His published filings for the Times from his new post in India are few and uninteresting. He’s no longer asked to appear on TV and radio for commentary. We’re all embarrassed.

We’re embarrassed because this award-winning journalist who uncovered everything from the ivory wars in Kivu to the kidnaping methodologies in Somalia wrote a book instead to let us know how long it took him to lose his virginity, his clearly yet confused sexual orientations, the private personal controversies with his lovers and wife, and his confession that he broke the law as a kid painting the side of private building at night with his buddies.

It was a book you’d expect from Tony Danza.

It’s so self-indulgent that it makes you wince. And this forces the question, did these petty personal things really mean more to him than being instrumental in creating, sustaining and then keeping open the largest refugee camp in the world, Dadaab?

Without Gettleman’s Pulitzer Prize winning – and dangerous – reporting in Somalia, up to a million victimized Somalis could today be living in terror.

So instead we’re supposed to laud him for confessing his infidelities to his wife?

What is a journalist, today? Just another celebrity seeking applause?

I took dozens of notes and one sticks out in my mind again and again. It was the first note I took, towards the beginning of the book, when Gettleman is just starting out in Africa as a college kid with friends driving around.

He writes of the first time he walked freely among Africans then deigns to conclude that the Africans who stared at him weren’t resentful or angry, just happy and friendly.

This mantra among western visitors is the most racist and deplorable assessment of their hosts imagineable. Of course they’re angry. Ever heard of slavery? How about the colonial era, read about King Leopold? Africans have every right to be angry, and just because they’re polite about it does not mean they’re not angry.

So this superficial description of a superficial situation suggests Gettleman’s “in-depth” reporting might be something else.

But even if he is nothing more than a journeyman with extraordinary talent at discovering what Times’ readers want, I would have expected him to at least realize that: we really liked him for his talent and what he revealed to us.

What on earth made him believe we would be interested in his personal life? And even sadder, I’m afraid, a pretty pitiful personal life, a very conventional personal life, the kind that dulls the spirit and erases the intellect. Actually, not even as interesting as Tony Danza. Maybe a weighty tome from John Grisham.

Can he recover? Can we get him back on his game – the game, anyway, that we thought he was playing?

Or, were we fooled? How much did he make up? Certainly if the revolutionary things he told us about the ivory wars and child soldiers were true, can he possibly think we have enough emotion left to tolerate his drippy soliloquy of naked black boys “with spears” helping him realize “we’re all bound together.”

I’m going to hold steadfast and believe he didn’t make anything up. I’m going to make an intellectual leap that what he uncovered in Africa was more meaningful and moving to me than him, and that he’s just a darn good reporter with a pitifully immature psyche.

But he can’t unwrite the book so I don’t know if I’ll ever be able to read him, again. Gettleman, in his late forties, is of the generation of journalists whose role has to change because of technology. Maybe doesn’t matter what remarkable information about the world you’ve discovered, what really matters is all the prurient revelations about yourself that get you on late night TV?

Take heed all those who care: Gettleman should not be the model.